The Xiaomi Mi MIX 3 is the world’s first smartphone with a sliding structure, which helps the phone in sporting one of the highest screen ratios in the industry. But it won’t stay alone in this state for a long time. On October 31, another phone with a similar feature is going to hit the market. As you know, it is the Honor Magic 2. Moreover, the Lenovo Z5 Pro will be officially announced in a day. Today, the Magic 2 leaked in a Master Lu benchmark, disclosing everything related to its hardware.

There is no doubt the phone with a model number of TNY-AL00 is the Honor Magic 2. It is said to come with an AMOLED screen that has a resolution of 2340 × 1080 and an aspect ratio of 19.5:9, a Kirin 980 processor, which is paired with a 6/8GB of RAM and a 128GB of storage, and it runs on Android 9.0 system. As you should know, the Kirin 980 is the world’s first chip based on a 7nm process node and the Honor Magic 2 is the first phone from this brand to be packed with this SoC. 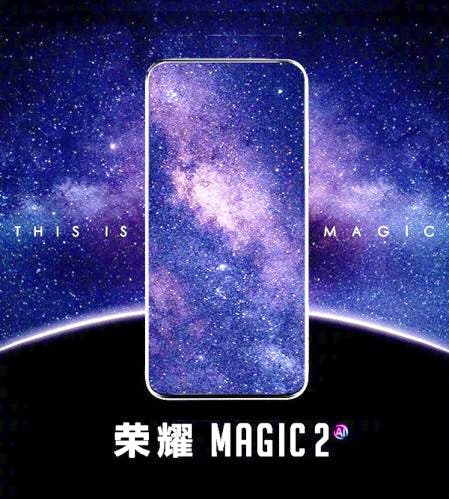 However, the selling point of the Honor Magic 2 is considered to the sliding structure, which is called the Magic Slide sliding screen structure. Due to it, the phone has a screen with a nearly 100% of screen ratio.

Xiong Junmin, vice president of the Honor business department, revealed that the Honor Magic 2 uses the butterfly five-track sliding screen structure independently developed by Honor. The four-slide rails are nested in the upper and lower sides. It not only enhances the strength of the whole machine but also makes the connection between components more compact. The addition of the fifth rail micro-auxiliary rail ensures the fit density and smooth experience of the phone.

At last, the Honor Magic 2 supports screen fingerprint recognition, which makes our protagonist the first from Honor coming with such a feature.