Since the official release of Huawei’s flagship chip, Huawei Kirin 980, the company has been embedding this SoC in as many devices as possible. According to recent reports, we might soon see this chip in another Huawei phone, this time from its Honor sub-brand. A new listing on the 3C database shows that two models from honor dubbed VCE-AL00 and VCE-TL00 were recently certified. This smartphone also got CMIIT (China Ministry of Industry and Information Technology) certification.

There are growing speculations that this smartphone is the upcoming Honor V20, the successor to Honor V10. According to the folklore of the V series, the Kirin 980 chip will most-likely power thus smartphone and it is expected to become the cheapest Kirin 980 mobile phone on the market. 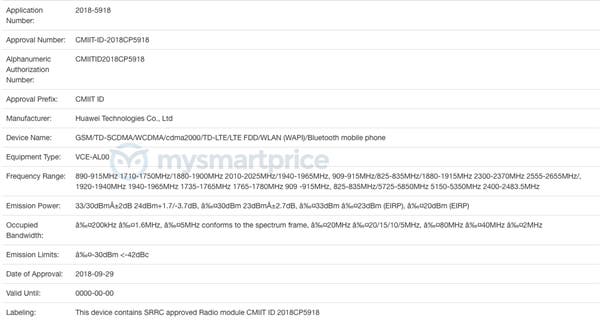 Well, 3C certification usually doesn’t reveal much about the device but we can see that it comes with an 18W charger. The design of this smartphone has not been officially confirmed but it is likely that it will use some sort of notch design, either a water drop notch or a wide notch. In recent times, we have seen a comprehensive full-screen design from Huawei (Magic 2) so we cannot also rule out the possibility of this design. The Honor V20 is expected sometime next year, probably early next year. To complement the SoC, the Honor device could sport 6GB or 8GB of RAM and proportionally high internal memory.

Next Nubia X first official sales - sold out in seconds