On November 3rd, market research institute, Counterpoint Research, released its latest research report. According to reports, global smartphone shipments reached 386.8 million units in the third quarter of 2018, down 3% year-on-year. Samsung is still the world’s number one, but its shipments continue to decline, and the world’s second-largest Huawei ushered in a burst of growth, leaving Apple behind. 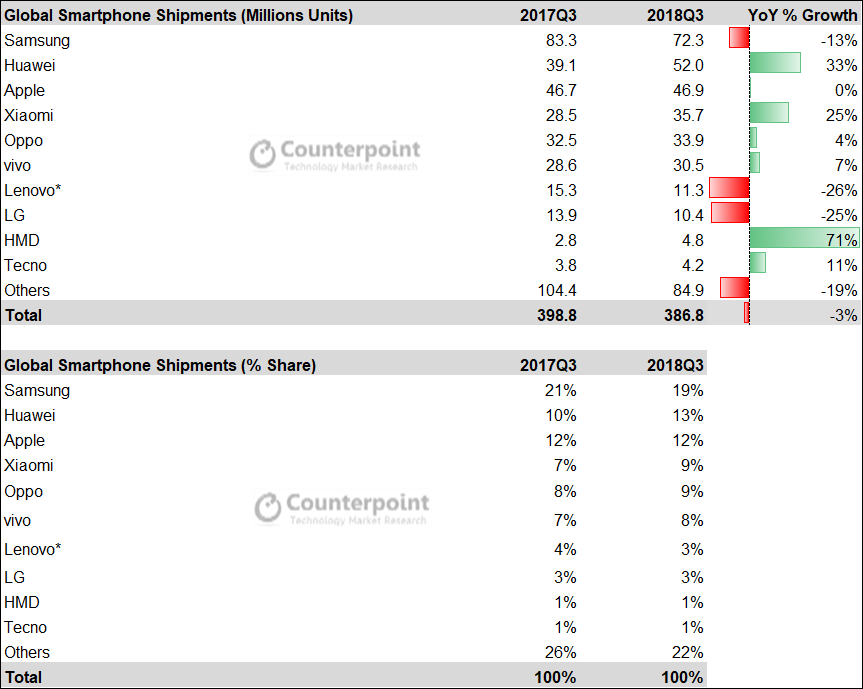 According to the report, in the third quarter of this year, the world’s top 10 mobile phone brands currently account for 79% of the global market share, with the remaining 21% market share being competed by more than 600 small brands. Samsung continues to lead the entire smartphone market with a 19% market share. However, Samsung smartphone shipments have fallen for the fourth consecutive quarter. Although Samsung’s smartphone shipments in India have reached record highs, Chinese brands continue to grow rapidly and perform strongly in non-Chinese markets.

It should be noted that although the annual shipment of Apple iPhone has remained stable compared with the same period last year, the market share is 12%, slightly behind Huawei’s 13%, but its revenue has increased by 29%, and the average selling price of iPhone has reached a record high. The most incredible growth in the third quarter came from Nokia phones, which grew 71% compared to the same period last year and ranked among the world’s ninth largest smartphone brands, and growing.

Finally, Counterpoint Research said that major OEM handset manufacturers are subtly improving by offering additional features such as AI artificial intelligence, dual cameras, full-screen and higher memory configurations. The average selling price of the equipment does help the brands maintain revenues in the event of a decline in shipments. In addition, the next growth cycle in developed markets may have to wait until commercial 5G technology emerges, but the 5G technology still needs to wait for a certain period of time.