Apparently, what Realme’s CEO said a couple weeks back isn’t becoming reality, or at least not yet.

Some of you will indeed remember that Madhav Sheth promised the next Realme phone will be packing a new MediaTek Helio P70 processor. Well, according to benchmark site Geekbench, the latest device produced by Realme appearing on their platform is instead powered by the older Helio P60.

The phone in question is code named Realme RMX1833 and, as you can see in the screenshot below, it shows a single core score of 1560 and a multi-core score of 5926. 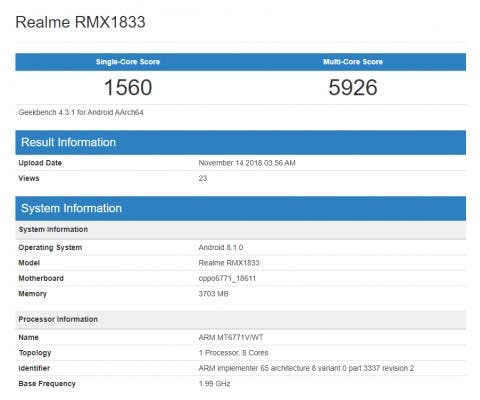 Now, these scores don’t necessarily prove the handset is equipped with a MediaTek Helio P60, but it is very likely as it is less than 50 points away from the mentioned CPU. So, they either optimized an Helio P60 or they implemented a new SoC which brought basically no improvements, at least as far as raw computing power is concerned.

Either way, along with the CPU score we also had a peak at the amount of RAM: 4GB and the OS it’ll run: Android 8.1 Oreo.

What do you guys think? Are we looking at a weak Mediatek Helio P70 score or still an older P60?