Currently, most of the new smartphones come with Android 9 Pie pre-installed. But this is going to change soon. The next version will be called Android Q (aka Android 10.0). Of course, the first model to get it is the Google Pixel. The latest model from this series is the Google Pixel 3 XL, which has leaked in GeekBench just recently showing up Android Q onboard. But while many manufacturers are struggling to be the next to get it, seems Xiaomi has won the race. Today, the Xiaomi Mi 8 SE leaked in the GeekBench 4.3 database, showing it has started a test based on the Android Q system. It was tested via this benchmark on November 25. The Snapdragon 710 processor scored 1830 and 5819 points in the single-core and multi-core tests, respectively. 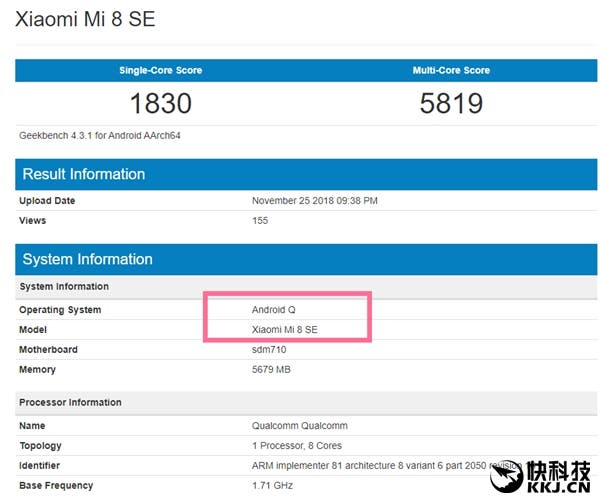 As for the Android 9 Pie, the first developer preview version was released in March this year, and the official version was released in August. So the first developer preview version of Android Q is expected to debut next spring. For Google, the fragmentation phenomenon is still very serious. Android 9.0 is released for three months, and the user base still accounts for 0.1%.

The Xiaomi Mi 8 SE is considered to be a ‘small screen flagship’, which uses a 5.88-inch Samsung AMOLED notch display. Its dimensions are identical to the traditional 5.2-inch smartphone, but it has a larger screen. Moreover, it was the first phone to come with a Qualcomm Snapdragon 710 processor, a 6GB RAM, a front 20MP camera, a rear 12MP + 5MP AI dual-camera, the main sensor of which has a unit pixel area of 1.4μm and supports Dual PD Dual-core focusing.