A couple of months ago, OnePlus launched its next-gen flagship devices called OnePlus 7 and OnePlus 7 Pro. Both the smartphone runs on the latest version of Android Pie out-of-the-box. As you already know, Google recently announced the official release date of the upcoming Android 10. For those who’re unaware, the search engine giant has left behind the dessert naming of its software versions. Instead, the company will now use simple numerical nomenclature.

Well, it seems like the OnePlus is all set to introduce the upcoming Android software to its 7-series lineup much sooner than we expected. So far, whenever a new Android software goes official, Pixel devices are the first one to taste it. Other OEM manufacturers such as OnePlus make use of the software a couple of months later. This is largely due to the fact that the brands have to add custom features to the software. 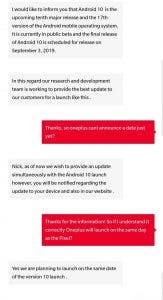 Google is all set to make its latest Android 10 official on September 3 which is right around the corner. If the recent report is to believed, OnePlus might also launch the Android 10 software for its recently launched OnePlus 7 and OnePlus 7 Pro devices on the very same day. This will make the brand very first OEM manufacturer to do so. As you can see from the image above, one of the OnePlus customer representatives revealed the Android 10 release date. As per the representative, the smartphone maker might release the Android 10 update for both the smartphones on the official launch date.

Since the reliability of this information is not that solid, the report should be taken with a pinch of salt. There is a high chance that the Chinese company might end up delaying the release. It is worth mentioning that OnePlus managed to get its hands on Android 10 beta quite early on. Keeping that in mind, the early release date of Android 10 for the OnePlus 7 and OnePlus 7 Pro would not be a surprise.

Other OnePlus Devices in the Pipeline

Once the OnePlus 7 and OnePlus 7 Pro receives the update, we can expect the OnePlus 6 and 6T to be the next one in the list. There is still no information whether the earlier OnePlus devices will get to see the face of Android 10. The smartphone maker is also expected to launch OnePlus 7T and OnePlus 7T Pro next month and we might see it flaunting the latest Android 10 out-of-the-box.