A new year of Smartphones inovation will be upon us in a matter of weeks. Huawei’s, Samsung, Xiaomi and even Oppo’s plans for the coming year are no more secrets. But what does the 2019 hold for troubled ZTE, and other Chinse brands? well, freshly obtained information from Eurasian Economic Commission in Russia might have given us a glimpse of what to expect from ZTE.

The guys at 91mobiles have uncovered a list of unannounced smartphones that were recently given approval by the Russian Eurasian Economic Commission. 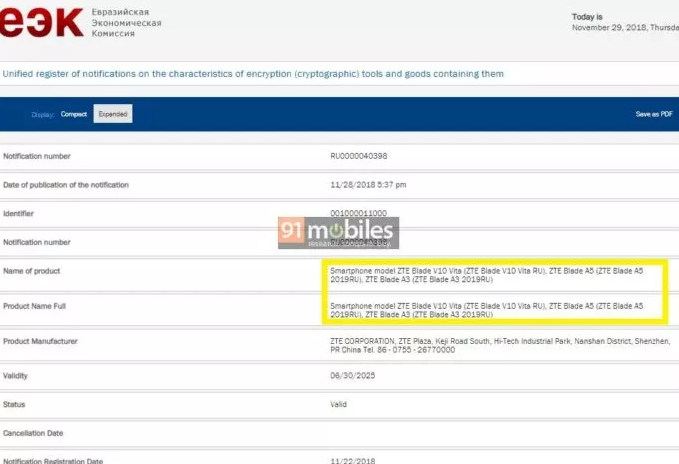 On the list of the recently certified ZTE phones is the ZTE Blade V10 Vista- a sucessor to the ZTE Blade V9 launched earlier this year, as well as two devices from its budget A series- the Blade A3 (2019), and Blade A5 (2019). Many of the certification website usualy do not disclose detail of devices certified by them, and that is exactly the case of the Russian Eurasian Economic Commission. Therefore, we have no hint on the specs as well as other detail of the devices.

To recall, two U.S. senators recently accused the Chinse firm for illegally worked with individuals that are covered by government sanctions, as well as having unlawfully used U.S. parts and components, and helped the government of Venezuela to track and investigate citizens, violating their rights.