Back in September 2018, Samsung launched Galaxy A7 (2018) which was the company’s first triple camera phone belonging to a mid-range segment. Now, the handset has appeared on the GeekBench listing running Android 9 Pie. Seems like Samsung is gradually progressing with Samsung Galaxy A7 (2018) software update.

Samsung’s Galaxy A7 (SM-A750FN) update of Android 9 Pie would be out very shortly as Samsung is currently working on this update for the phone. Apart from that, the device has scored 1,686 points in one core test and on the multi-core test it score 4,894 points on the benchmark. The handset has scored exceedingly well as compared to the Oreo OS scores which speculate that the device will work more efficiently with the new update. 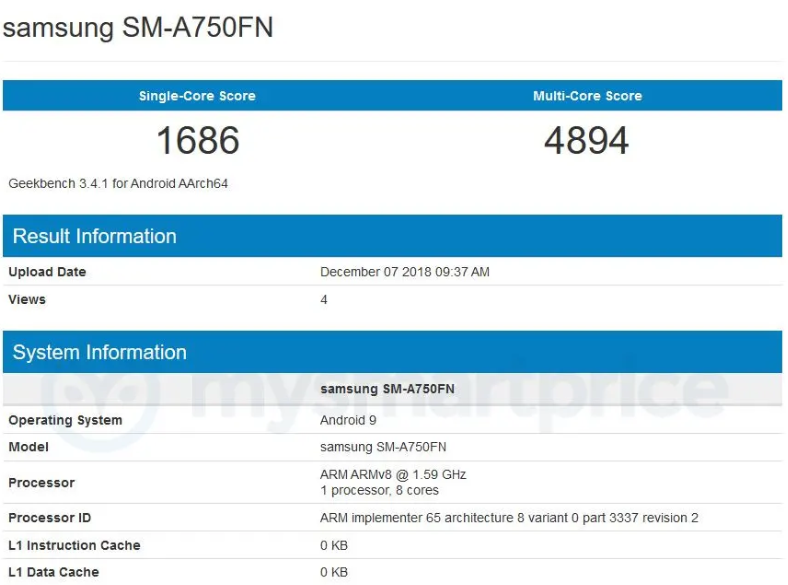 Recently Samsung had announced that it will be introducing its One UI Android interface along with the Pie update for its premium smartphones but it is uncertain whether Galaxy A7 (2018) will be included or not. Meanwhile, Samsung could be rolling out Android pie update on Galaxy S9 series and the Galaxy Note 9 in early 2019.

Also earlier this week, Samsung announced that they will be enabling Super Slow Motion video recording in the Galaxy A7 (2018) in the new update. To recall, Galaxy A7 boasts an outstanding triple rear camera of 24MP + 8MP + 5MP sensors and now the company has added the slow-mo feature which could prove a great combination for the users and on the other hand it sports a 24MP selfie shooter. Plus the device will be updated to the fresh new Android 9 Pie very soon. The handset is powered by Exynos 7885 Octa (14 nm) and is backed with an option of 6GB/4GB RAM.