Xiaomi is all set to release a new series of smartphones on December 24 carrying the Xiaomi Play moniker. The device will also be the first of the Chinese manufacturer to feature the more elegantly-designed teardrop notch at the top of the display. Today a new leaked poster surfaced at Weibo, revealing the handset internal specifications and curious details about the chipset. 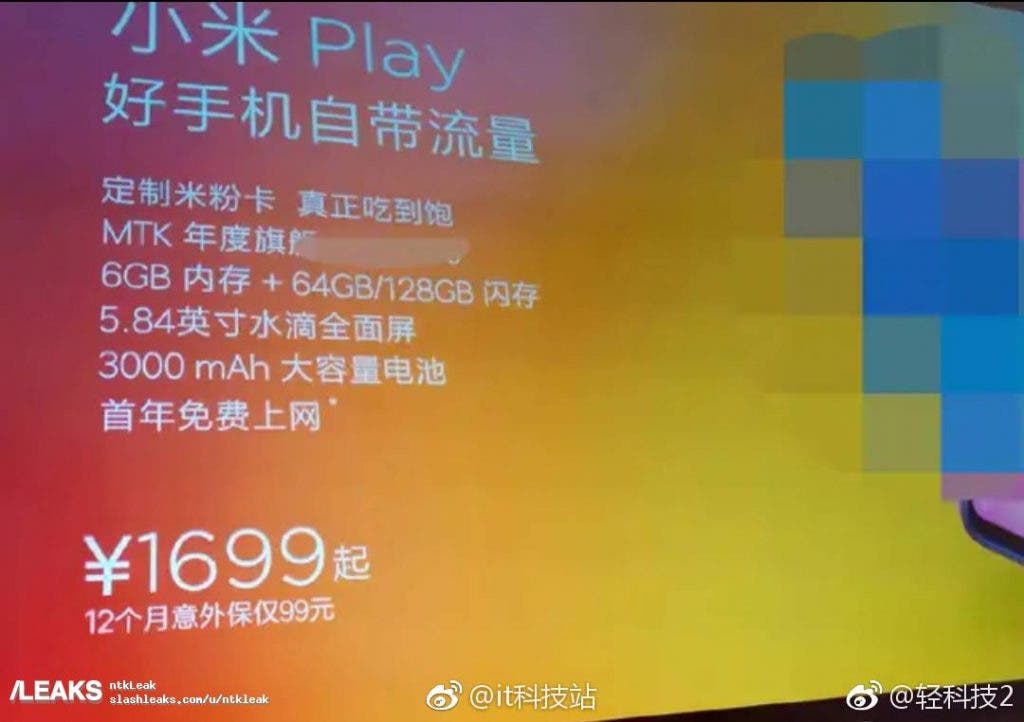 Apparently, the Xiaomi Play will feature an MTK chipset, but unfortunately, the exact name of the chipset is censored, as well as the device’s image on this leaked poster. Considering that both the Helio P80 and P90 are yet to be released in a smartphone, we would bet that the Xiaomi Play will feature the recently released Helio P70, that until the moment is exclusively being used by the Realme U1. While the Helio P60 is around there for quite some time, we don’t think it’s compelling enough for a new release, so would make sense for Xiaomi to stick with the newest, especially in a brand new smartphone series.

The leaked posters also confirm that the smartphone will be equipped with 6GB of RAM, plus 64GB or 128GB of Internal Storage, unfortunately, there’s no info if the device will support microSD cards. Judging by the internal specifications we can say that this isn’t a simple mid-range smartphone, one more reason to believe that the newest Helio P70 is the right choice here.

The Mi Play will come with a 5.84-inch FHD+ display with a teardrop notch at the top to house the front-facing camera and sensors. Just like previous reports, that pointed a 2,900mAh battery, the poster confirms the presence of a 3,000mAh unit. So it’s safe to assume that the actual capacity will be right there between 2900/3000mAh. Considering past Xiaomi smartphones, that are known for their good battery life, we are a bit disappointed to see that the new smartphone will come with a “standard” battery capacity. Despite the Xiaomi Play name, users should not expect more than a day of usage with this amount of juice.

The Xiaomi Play is expected to come with 10GB of Free Data, allowing users in China to enjoy a lot of web browsing or multimedia content without needing to pay extra bucks for connectivity. The handset will come with an initial price of 999 Yuan (~144).

Next Facebook cryptocurrency 'StableCoins' could power WhatsApp Payments in India