On the evening of December 29, through his official Weibo channel, Xiaomi founder and CEO, Lei June said: ‘Today is the last working day in 2018. When I got off work, I saw some offices still lit up. Everyone worked hard and got off work early. Thanks to Xiaomi students for their hard work and wishing a happy new year.’ In the post, some Mi users noticed that Lei Jun used the Xiaomi Mi MIX 2S to take the photo. So they asked ‘Why don’t you use the newly released Xiaomi Mi MIX 3?’ Lei Jun responded: ‘I have put the Mi MIX 2S camera upgrade and now I am helping to test it.’ 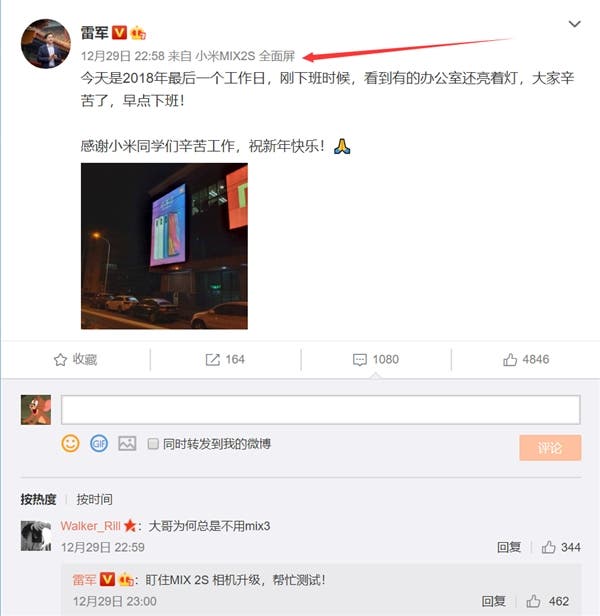 As you know, the Xiaomi Mi MIX 2S is the first flagship product launched by Xiaomi this year. It is also the first dual-camera smartphone of the Xiaomi’s MIX series. It sports a dual-camera with a 12MP wide-angle + 12MP telephoto lenses combination, of which the 12MP wide-angle lens is the Sony IMX363 CMOS, which comes with a unit pixel area of 1.4μm and supports Dual PD dual-core focus.

According to the official introduction, the principle of handheld super night scene shooting is that when the shutter is pressed, the camera will take 8 photos with different exposure schemes at the same time, and select key features for comparison, picture alignment, compensation for correcting jitter, etc., and finally combine a beautiful picture.

Next Why is the development of 5G network in India so slow?