In order to stay relevant and boost sales, Samsung is expected to soon introduce a new series of smartphones – the Samsung Galaxy M-series, and now more evidence has emerged that suggests that the rumored Galaxy M10, Galaxy M20, and even the Galaxy M30 will be arriving soon.

After going through the FCC certification process in the USA, the rumored Galaxy M10 bearing the model number SM-M105F/DS now has a support page on Samsung’s India website. The page only has the model number with the D indicating that Samsung might offer the dual-SIM variant of the device in India. 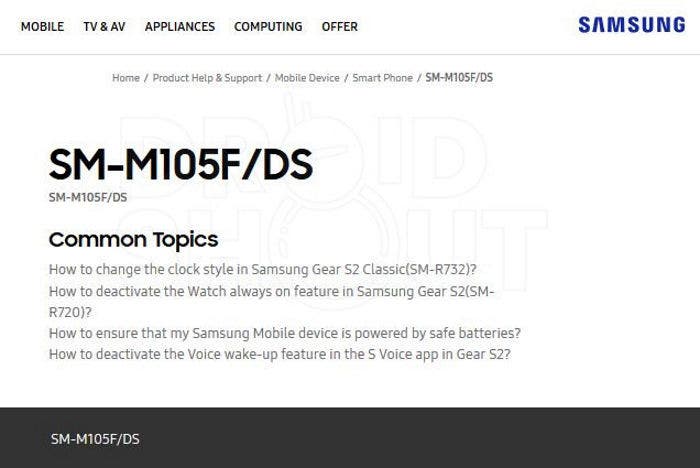 Although the page has since been pulled down, not before the guys at Droidshout got a snap of it. Previous reports say the entry-level Galaxy M10 will be joined by two more premium devices – the M20 and M30.

While the support page doesn’t reveal anything other than the model number, previous leaks and rumors suggest the device will come with a 6.5-inch display with Samsung’s Exynos 7870 SoC under the hood. The SoC will be supported by 3GB of RAM with 16GB/32GB of internal storage expandable up to 64GB via a microSD card, while it will boot Android 8.1 Oreo with Samsung Experience out of the box.

Official and detail spec will be revealed at launch, though no specific launch time has been announced.