Earlier today, a new Xiaomi model designated “M1901F7C” appeared on TENAA. From the TENAA images, the smartphone has the name “Redmi” written behind it which shows that this will probably be the first smartphone from the independent Redmi brand. Before now, Redmi phones still use the name “Mi” behind it. Looking at the details of this device, it appears that Redmi will be starting off with a strong foot. 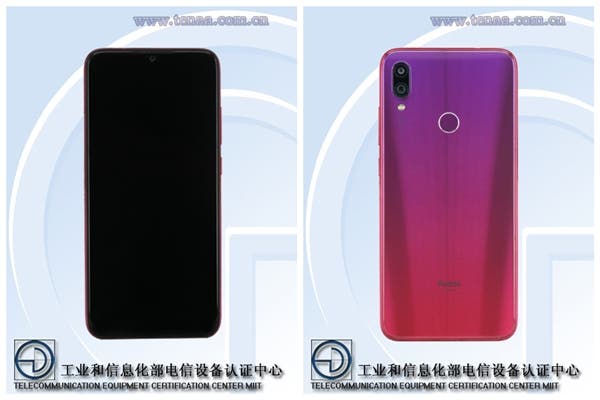 The smartphone adopts the recently popularized gradient colour design and it uses a dual rear camera setup with a rear fingerprint sensor. However, according to the spy photos released by Xiaomi co-founder, Lin Bin, the rear camera main lens is 48MP shooter this the imaging effect  of this device is worth looking forward to. In the core configuration, this Redmi maiden smartphone uses a 6.3-inch display with a battery capacity of 3900 mAh and body size of 159.21 × 75.21 × 8.1 mm. The display will most likely be a waterdrop screen because the TENAA images show the front camera positioned at the center of the phone but there are no other visible sensors around. Only waterdrop display behaves this way when the screen is blackened.

From previous leaks and rumors, the upcoming Redmi smartphone will be powered by a Qualcomm Snapdragon 675 chip, which features the new Kryo 460 architecture and the Adreno 612 GPU. Thus, it will provide better performance than the newly launched Xiaomi Mi Play. In addition, Lei Jun revealed that the forthcoming Redmi device will retain the 3.5mm headphone jack. Unfortunately, the TENAA document doesn’t confirm this. Since this device will probably not use a flagship chip, pricing will be everything. Lei Jun recently said that Xiaomi will continue to make good smartphones at affordable prices hinting that the price of the new device will be market friendly. The device is expected to be released on January 10 during the official announcement of Redmi independence.

Previous Honor's VP: Competition between Huawei & Xiaomi is over