Vivo recently shared a teaser for its upcoming Vivo smartphone in India which is likely to be called the Vivo V15 Pro. The V11 Pro successor will probably be one of the first phones to adopt the pop-up camera architecture, as is already confirmed by the teaser, embracing the legacy of the now discontinued Vivo NEX. Now, detailed specifications of the handset have also been revealed today via 91mobiles.

As per the exclusive leak, the Vivo V15 Pro will boast a Super AMOLED display while the exact screen size is not yet known. Moreover, it will also rock a Snapdragon 675 SoC becoming one of the first (or the first) to sport the mid-range Qualcomm chip in India. 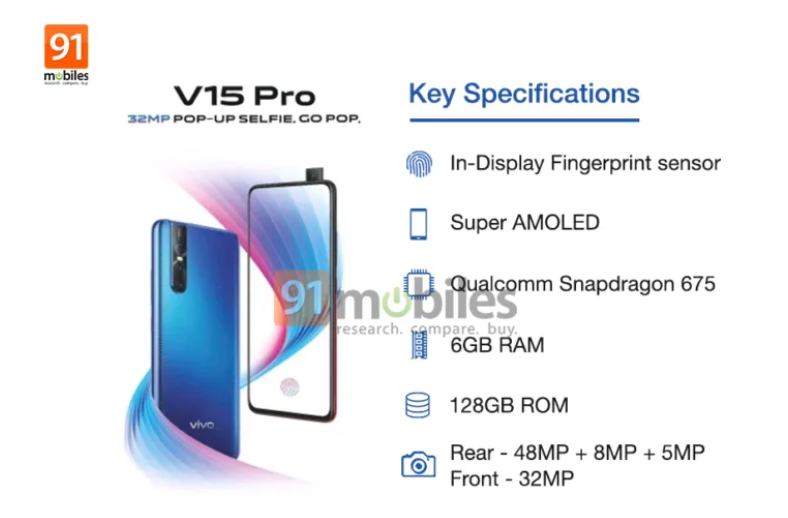 In addition, the Vivo V15 Pro will flaunt an impressive set of cameras. According to the source of the leak, the rear camera will be a Samsung GM1 sensor that takes 12MP photos and uses interpolation to output 48MP res photos. Moreover, this handset will also have a first triple camera setup in India from the house of Vivo. An 8MP sensor will accompany the primary sensor along with another 5MP shooter. Upfront, the publication confirms a 32MP sensor for selfies as well. There will be at least 6GB of RAM and 128GB of onboard storage, suggests the new report.

The handset will launch on February 20th while pre-orders begin five days before that. The Vivo V15 Pro could be priced around Rs 25,000 in India

VIVO V15 Pro Is About To Land In Thailand