Samsung Galaxy A50, Galaxy A30 and Galaxy A10 are certainly not the most anticipated smartphones of the moment from the South Korea’s producer, but they are the protagonists of an important indiscretion of the day, MySmartPrice team has in fact published a the complete technical specifications of the three mentioned smartphones.

2019 will be a very special year for Samsung and to celebrate the tenth anniversary of the Galaxy S series, the manufacturer is proceeding with the renewal of its entire lineup of smartphones. Samsung Galaxy UNPACKED 2019 will be held in San Francisco next February 20, during which they will be officially presenting the new Galaxy S10, the South Korean giant has already announced the new mid-range Galaxy M10 and Galaxy M20. The next step involves the Galaxy A 2019 series and now we are ready to tell you what should be the technical specs of the new Samsung Galaxy A50, Galaxy A30 and Galaxy A10. 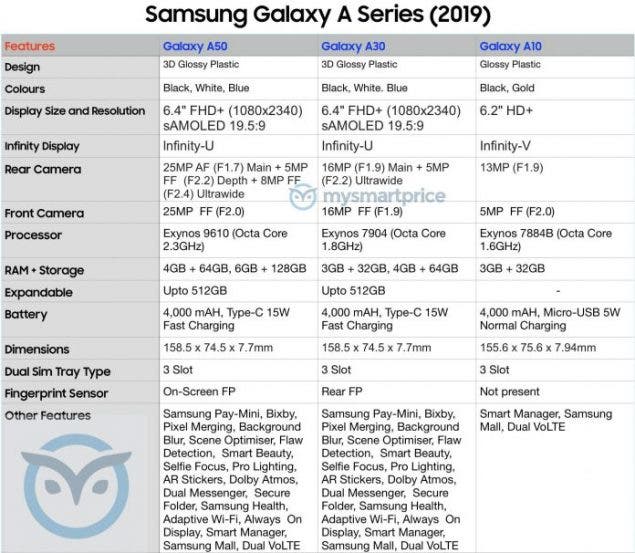 Samsung Galaxy A10, the cheapest model, will be made of plastic materials, as already happened for other Galaxy A smartphones years ago. The device will have a 6.2-inch HD+ Infinity-V display. Inside the “V” notch there will be a 5 MP camera. The phone will have an Exynos 7884B SoC with 1.6 GHz octa-core CPU, flanked by 3 GB of RAM and 32 GB of internal memory.

Apparently Galaxy A10 will not be equipped with a fingerprint reader, but will rely on the Face Unlock and other unspecified Android unlocking systems. The device will have a slot for two SIM cards and one for the microSD, will have a microUSB port, a battery of 4,000 mAh with 5W charging. Among the other features are Smart Manager, Samsung Mall and dual-VoLTE. Samsung Galaxy A10 will have dimensions of 155.6 x 75.6 x 7.94 mm and will be proposed in the colors Black and Gold.

Samsung Galaxy A30 will be made in “glossy plastic”, will have a 6.4-inch Super AMOLED Infinity-U display with Full HD + resolution and will be equipped with Always On Display. Another upgrade will concern the cameras, with a 16 MP (f / 1.9) front camera and a dual 16 MP (f / 1.9) + 5 MP (ultra-wide f / 2.2) rear camera. As we read, Galaxy A30 should take advantage of the “Pixel Merging” to get better quality photos. Other features include AR Stickers, Background Blur, Flaw Detection, Pro Lighting, Scene Optimizer, Selfie Focus and Smart Beauty. Galaxy A30 should measure 158.5 x 74.5 x 7.7 mm and be proposed in Blue, Black and White.

The Exynos 7904 SoC should be flanked by 3 GB of RAM and 32 GB of storage or 4 GB of RAM and 64 GB of storage, however expandable up to 512 GB via microSD. Galaxy A30 will have a dual SIM, dual VoLTE, USB Type-C, classic fingerprint reader on the back and 4,000 mAh battery with support for fast charging at 15 W. Among other features listed in the published sheet from MySmartPrice there are also Samsung Pay Mini, Bixby, Dolby Atmos audio, Dual Messenger, Samsung Health and Secure Folder.

Samsung Galaxy A50 will be the smartphone with the best technical specs. The fingerprint reader should be integrated under the display and it should count on a 25 MP front camera and a triple rear camera in 25 MP (f / 1.7) + 5 MP (for depth) + 8 MP (ultra-wide) configuration f / 2.4).

Next VIVO'S IQOO first phone renders surface, and it is a foldable phone

Samsung Galaxy M30s and Galaxy A50 Receiving Android 10 Update with One UI 2.0 in India