As usually happens, the new smartphones spot in spy photos ahead of their launch. The same happened with the OPPO F11 Pro, which is set to be unleashed tomorrow, on March 5. It’s going to be the next-gen flagship of the company. Therefore, it will be packed with a number of outstanding features. Today, /Leaks came in with an interesting photo, showing both the package and the handset itself. 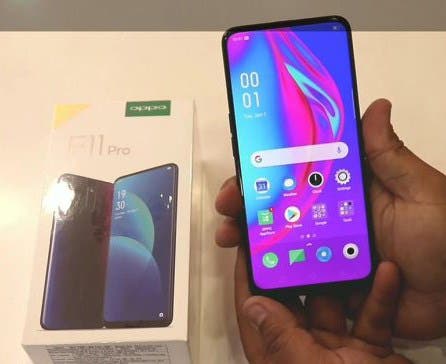 The information coming from this leaked photo is consistent with the previous leaks. The front of the OPPO F11 Pro sports a genuine full-screen; the front camera adopts a pop-up design; the rear panel carries a dual-camera, the LED flash is placed on the top; and at last, it will be packed with a 48MP+5MP sensors combination.

As said, the OPPO F11 Pro is going to be another 48MP camera phone. It’s said this sensor will be coupled with a 5MP sub-camera. The back of the machine also will use a 3D gradient glass design, which will have two variants of Aurora green and Thunder black.

Under the hood, the OPPO F11 Pro will be powered by a MediaTek Helio P70 SoC paired with a 6GB of RAM, 64GB and 128GB storage options, and a 4000mAh battery, supporting VOOC 3.0 fast charging. Of course, it will run on ColorOS 6.0 based on Android Pie.

The first country that will host the OPPO F11 Pro is India. It will hit this market on March 5, but there is still no official statement when other markets will get it.

More pictures of ELEPHONE U2 together with Oppo F11 Pro