OPPO sub-brand the – Realme at the Realme 3 launch event earlier this month confirmed it will be unveiling an enhanced version of the device sometime in April (REALME 3 PRO), but it didn’t reveal the exact date nor divulge any details regarding the upcoming device.

We are still weeks away from April, however, the Realme3 Pro has now surfaced online after it obtained relevant certification from the NBTC in Thailand as well as the BIS certification agency in India. While there isn’t a thing to take away from the certification documents, both bodies however certified the Realme 3 Pro under the RMX1851 model number, while the NBTC specifically confirmed we are actually dealing with the Pro variant of the recently released Realme 3.

Given that the Realme 3 Pro will be pitted against the Redmi Note 7 Pro, we expect the device to come with a slightly refreshed design, while it could also pack some specs and features similar to the Redmi device. First, it is expected to completely drop MediaTek SoC for the Snapdragon 670/675, while the dual rear camera might make a return, but might ditch the main sensor for a 48 MP camera sensor. A bigger battery could also make it to the list of added specs, while same could be the first Realme device to get the parent firm’s VOOC Flash Charge technology. 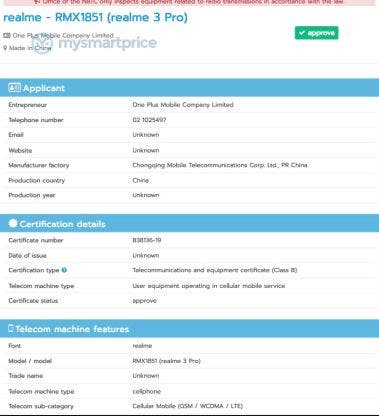