On March 18th, Redmi will release the Redmi Note 7 Pro, Redmi 7 and other non-smartphone gadgets in China. Also, Xiaomi will also release the Black Shark 2 on the same day thus it will be a very busy day for the company. Today, the company released invites for the March 18th conference. The invitation contains two papers;  one is an ordinary white paper, while the other is P2i waterproof processed paper. The Redmi Note 7 Pro comes with a P2i waterproof feature. 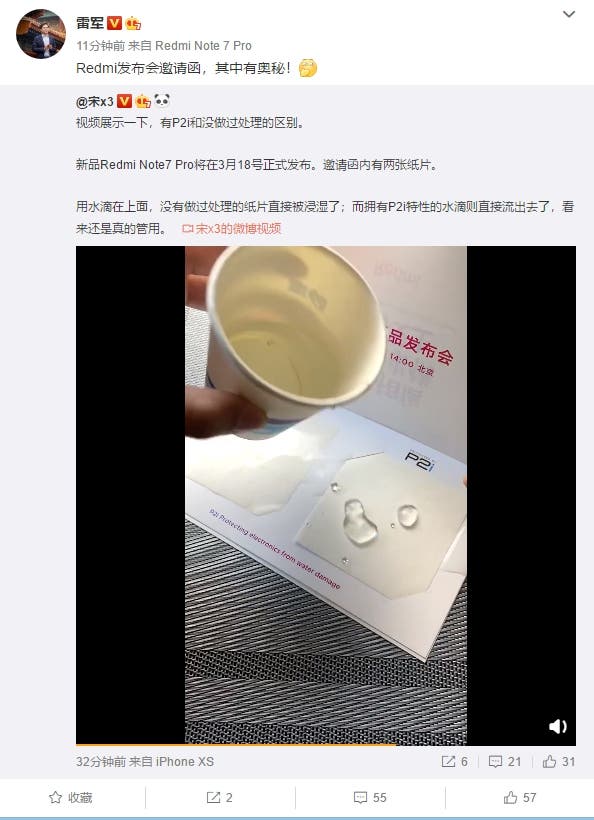 One of the recipients of this invitation did a little test with these papers and poured water on both of them. As expected, the ordinary paper quickly soaked water but the P2i processed paper did not soak water, rather the water just slipped away. The Redmi Note 7 Pro uses a P2i nano-hydrophobic coating which effectively prevents phone from liquid and dust.

The basic principle of this process is to coat a surface of an electronic device such as a mobile phone with a nano-coating similar to the porous structure of the lotus leaf. Using an exclusive vacuum plasma chemical vapor deposition method, the fluorocarbon polymer having water repellency is split by a radio frequency electric field in a vacuum environment, and then deposited on the surface of a mobile phone or the like, and grown to a layer of less than 50 nm thick. It gives a uniform nano-coating that is many times thinner than hair. This uniform water-repellent coating can effectively prevent damage caused by corrosion/water and reduce the probability of problems that affect the phone antennas, speakers, buttons, card slots, interfaces, etc. In addition, this coating does not affect the phone components themselves and their conductivity, and can maintain the original appearance, feel and function of the product.