At the MWC2019 conference, OPPO demonstrated the prototype of its 5G smartphone. Many users were thinking it’s the upcoming OnePlus 7. But later these assumptions were denied. But this doesn’t mean the OP7 isn’t on the way. Obviously, it is, and we are waiting for its arrival sometime in May. Before it happens, we can take a look at the non-official renderings of this handset. 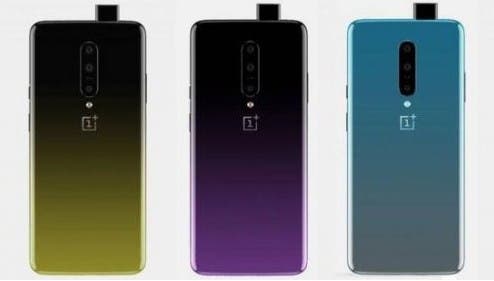 Originally, the suspected OnePlus 7 renderings were published on Android Headlines. According to them and the source, this phone will use a pop-up front camera, a triple-camera on the back, which is placed vertically, and there are three color options of black, purple, and gray.

Previously, it was reported that the OnePlus 7 will sport a 6.5 -inch full HD AMOLED display, a Qualcomm Snapdragon 855 processor. A triple-camera using a 40MP+20MP+5MP sensors combination, a 16MP front-facing camera, 8/12GB of RAM, 128/256GB ROM, a 4000mAh battery, supporting 44W fast charging, and Android 9.0 out of the box. However, OnePlus CEO Liu Zuohu made it clear this generation of the OnePlus flagship does not support 5G.

In fact, we can’t say these renderings are official and they have been leaked. We think they are based on the rumors and spotted information. And though they look ‘Samsungish’, there is every reason to think the OnePlus 7 will look so. First, the three-camera design is very popular nowadays, and OnePlus should use it on its upcoming model not to lay behind. As for the pop-up front camera, this is the only way not taking into account the sliding design that allows manufacturers to provide a genuine full-screen experience.

Next Promo event & discount coupons from the Geekmaxi e-shop