Lenovo owned Motorola is apparently gearing up to launch a new Android One Smartphone, although no official statement or invite has been issued, frequent leaks of a Motorola phone dubbed the Motorola One Vision is an indication the launch date isn’t far off. The device recently got certified by the FCC in the states, and now we got reports it has clear another pre-release hurdle after Brazilian telecom regulatory body, Anatel granted it approval.

According to authority, the upcoming Motorola One Vision will come packed with a 3500MAH/3290mAh battery with support for 1st  fast charging which quite lines up with what we gleaned from the FCC certification documents.

ANATEL has proven to often be a good source of information about the battery capacities of unreleased smartphones. It revealed the battery capacities of the Galaxy S9 from last year, the S10, and even the recently released Moto G7 lineup, even though there’s still a good chance the Brazilian agency might be wrong in this case, but that might not be the case given its listing corroborates that of the FCC.

The Motorola One Vision, whenever it launches, will be the company’s first smartphone with Exynos chipset  – precisely the Exynos 9610 SoC coupled with 3 or 4GB RAM models with 32, 64, or 128GB of storage. There is a good chance the device might also have a variant with 6GB of RAM as suggested by it appearance on Geekbench, though we can not bet out cash on that. Unverified reports say the device is expected to have a 21:9 display with a punch hole selfie-camera and a dual-camera setup on the rear consisting of a 48MP main shooter with “Long Exposure” and “Video 3D HDR.” 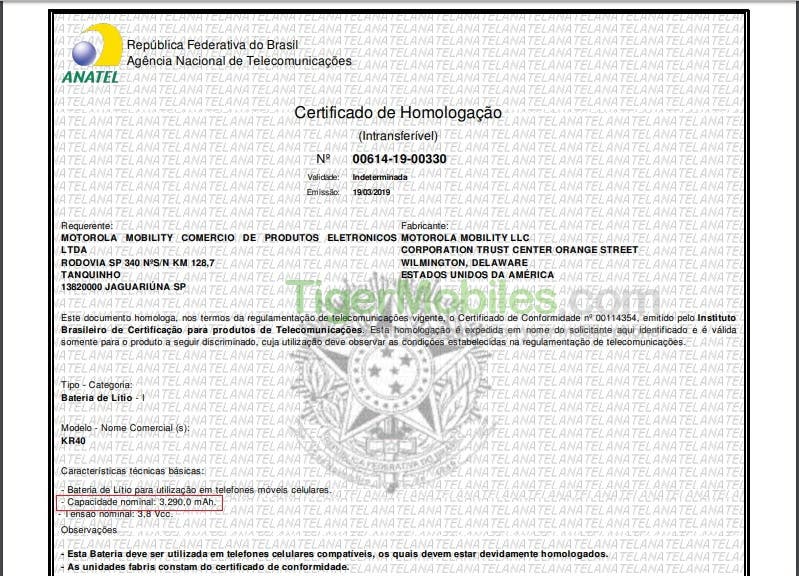 We expect the Motorola One Vision to be marketed as the Motorola P40 in China, though there are currently no concrete shreds of evidence that point to the device details, pricing and as well as the release date.

Previous Reports indicate that the next iPhone will boast PowerShare feature

Next Huawei P30 Pro is shown on another hands-on video