Oppo is all now set to launch the Oppo Reno, the first phone under its new Reno series, on April 10. And while the Chinese firm hasn’t outrightly that the Reno will arrive as a full series rather than a single phone, we already know it will come in a number of variants, all thanks to leaks and even official teaser from the company’s VP. We already saw renders of the OPPO Reno on a Chinese retail site revealing a vibrant purple color, wielding two rear cameras which align with earlier leaked that suggest a variant with ‘no Periscopic camera will be part of the Reno series.

The company’s VP in one of his latest teaser has also confirmed there a Reno with no Periscopic camera – which he referred to as the Standard OPPO Reno. Now, with a couple of days into the official launch, a new leak has exposed a variant of the Reno with a periscope camera in marketing billboards, hung on a ceiling of what looks to be a retail store. This is the more premium OPPO Reno tipped to launch with two camera lenses and a periscope module underneath, comprising of a 48MP f/1.8 main snapper, a 20MP f/2.6 ultra-wide and a third 5x optical and 10x hybrid zoom camera. 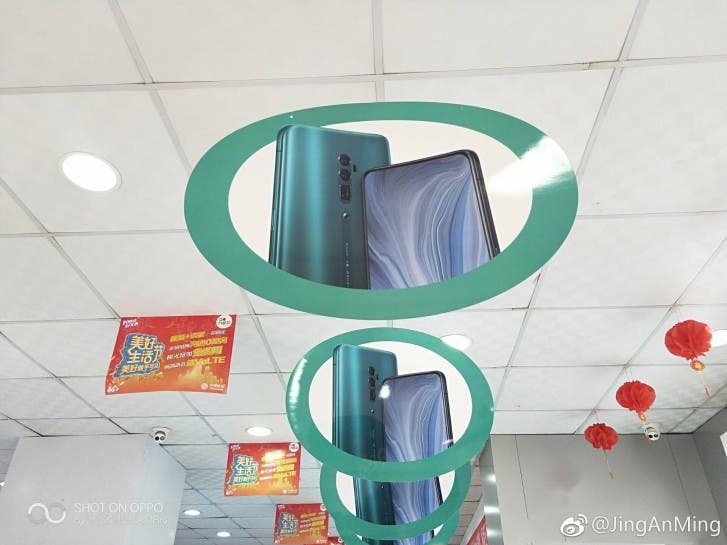 Previous rumors suggest the so-called premium Oppo Reno flagship will come with a Snapdragon 855 with liquid cooling,  a 4,065mAh battery, while the standard will make do with the Snapdragon 710 SoC with heat-conducting gel and graphite sheet for heat dissipation, 6GB RAM and 256GB of storage. Reports also say there could be more variants that will sit at different price points to appeal to different audiences.

April 10 is the date, just keep a tab on us as we get you more updates.

Next New Phone Packed With Kirin 710 Leaked, Supposed to Be Honor 10i