According to Gartner and IDC, the PC market is still declining. Coincidentally, they gave the same amount of PC shipments in the first quarter of 2019, which was 58.5 million, but the rankings of specific vendors were inconsistent.

After experiencing a decline in quarterly shipments for six consecutive years, the PC market ushered in growth in the second quarter of 2018, unchanged in the third quarter, and then declined again in the fourth quarter.

Gartner and IDC analysts pointed out that the CPU shortage is one of the reasons for the decline in the PC market in the previous quarter. But it seems that the reason is more than this: the decline in PC demand may also be an important reason.

According to Gartner, global PC shipments fell 4.6% to 58.5 million units in the first quarter of 2019. The top six vendors are Lenovo, HP, Dell, Apple, Asus, and Acer.

As shown in the chart below, Gartner found that among the top six, only the top three PC vendors improved their sales. Apple’s shipments also declined, but its share increased.

Gartner Principal Analyst Mikako Kitagawa said, ‘We saw the start of a rebound in PC shipments in mid-2018, but anticipation of a disruption by CPU shortages impacted all PC markets as vendors allocated to the higher-margin business and Chromebook segment. While the consumer market remained weak, the mix of product availability may have also hindered demand. In contrast, Chromebook shipments increased by double digits compared with the first quarter of 2018, despite the shortage of entry-level CPUs. Including Chromebook shipments, the total worldwide PC market decline would have been 3.5 percent in the first quarter of 2019.’ 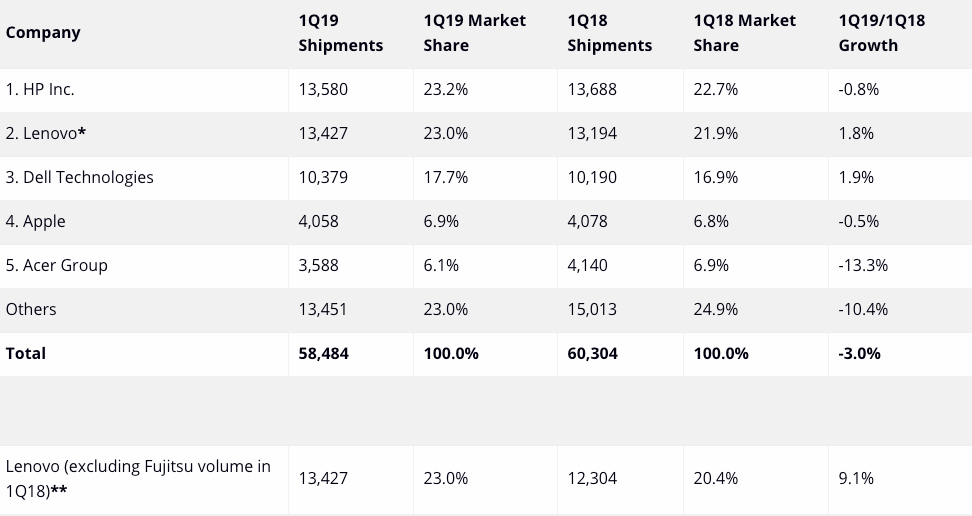 IDC ranked HP in the first place, Lenovo ranked second, but the source pointed out that HP’s shipments decreased. According to IDC, this means that only Lenovo and Dell have seen a growth in sales and the sales of the rest fell.

IDC research manager Jitesh Ubrani said in a statement: ‘Desktop PCs were surprisingly resilient as the commercial segment helped drive a refresh during the quarter. Capitalizing on this refresh cycle, the top vendors – HP, Lenovo, and Dell – each increased their year-over-year volume and captured additional share in the desktop PC market.’