The Snapdragon 730 was revealed just a couple of weeks ago, and it’s currently Qualcomm’s biggest offering the premium mid-range class. However, a new leak reveals that there is a Snapdragon 735 in the company’s timeline as well. The leaked document surfaced today and reveals some key specs of this upcoming chipset.

The new chipset will be built in the impressive 7nm process like the current Snapdragon 855. It will also feature an Octa-Core CPU in an unusual 1+1+6 core configuration – That’s a new curious approach in comparison with 730’s 2+6 cores and 855’s 2+2+4. The clock speeds of this new chipset are expected to be 1×2.9GHz + 1×2.4GHz + 6×1.8GHz featuring Kryo 400-branded cores that are likely going to be Cortex-A76 derivatives for the two main ones. The other six cores will likely be Cortex-A55-based. 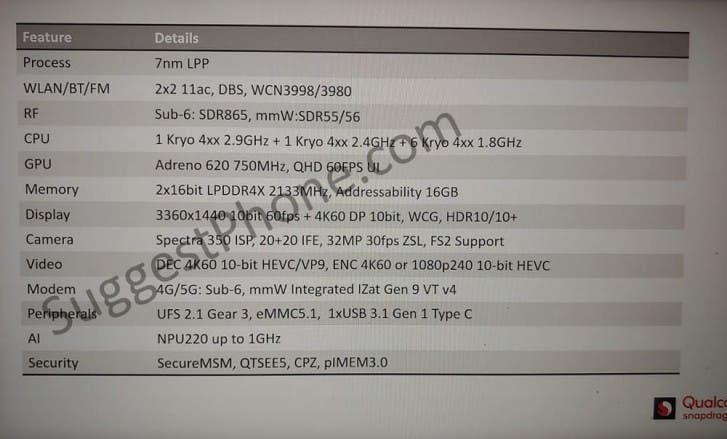 The graphical processing will be ensured by Adreno 620 GPU clocked at 750MHz, compared to the 825MHz clock speed of the Adreno 618 in the Snapdragon 730 GPU. The alleged Snapdragon 735 NPU220 ticking at up to 1GHz for AI-related operations. Furthermore, the new chipset is set to come with a 5G Modem. A curious characteristic that might lift some speculations, after all, this chipset could be Qualcomm’s preparation for introducing the 5G network to the upper mid-range segment. Although we still don’t know it will be an advanced 5G network out there to be used until the next year.

The source of the document is the same that brought up an early look of Snapdragon 730 last year. Interesting enough, the source was mostly accurate, so we have a strong belief in the accuracy of this new piece as well. For now, Qualcomm will be of interested in selling the Snapdragon 730, so it may be soon for a Snapdragon 735, but time will tell if the leak is accurate.