Redmi via its Indian head has already announced that it will be revealing the name and perhaps the launch date of the much-rumored flagship device from the Xiaomi spinoff brand. In a Weibo survey posted earlier today, the man at the helm of Redmi affairs in India left us with four possible Redmi phone monikers to make our guess, and while our best bet is to wait until tomorrow when the brand intends to formally reveal the naming of its upcoming flagship phone.

Ahead of tomorrow’s revelation a specs sheet of a Redmi device has surfaced online detailing the specs and features of the device. Allegedly dubbed the Redmi Pro 2, the device we are dealing with features a similar design to the Redmi Note 7, albeit the lack of the notch which it traded for a pop-up selfie camera system.

As for its detail specs and feature, the leaked spec sheet suggests the device could come fitted with a 6.39-inches with FHD+ resolution, Corning Gorilla Glass 5 protection and a built-in fingerprint sensor. On the flip side, the alleged Redmi Pro 2 will come with a triple camera setup one of which is a 48MP main sensor, while it will get a 20MP camera sensor fitted to the pop-up system. The battery is rated at 3,600 mAh and supports 27W fast charging. Redmi is also sticking with a fan favorite – the IR port. 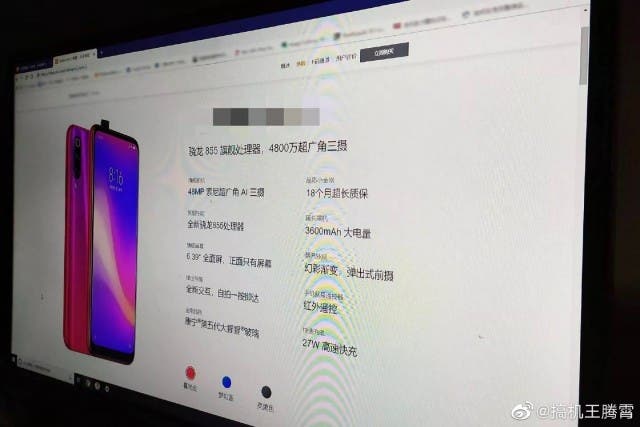 A few of the alleged Redmi Pro 2 specs lineup with the RedmiX/ K20 Pro specs, however, the pop-up camera design seems a bit different. The Redmi X as per previously leaked render and posters is expected to come with a pop-up camera system aligned to the left, the latest leaked images suggest the pop-up camera on the Redmi Pro 2 is centrally aligned, so there are indications the device could be a different Redmi flagship tipped to launch soon.