The so-called flagship killer /Demon king official launch (Redmi K20)is still a couple of days away, but the company can’t wait to launch it already. The firm’s GM and the official Redmi social media handlers have been drip feeding us with bits of information, and with this pace, it appears there won’t be much left to reveal at the launch tipped for May 28th in China.

The official Redmi on Weibo has released a teaser poster that reveals the battery size of the upcoming Redmi K20. The poster has the tag “Want More” with “4000 mAh long life” indicating a 4000mAh battery – the same battery capacity found in the Redmi 3s, and the entire Redmi Note 7 family. One that isn’t sure yet is whether or not this will feature in the alleged Redmi K20 or the regular Redmi smartphones or both. While that isn’t the big deal, reports have it that the device will bring to the table one of the features currently found only in the Mi 9 flagship –  the fast charging capability up to 27W.

The company had earlier this week confirmed the Flagship Killer will be powered by Snapdragon 855, feature a 48-megapixel rear camera while a separate cryptic teaser reveals it will indeed come with a pop-up front camera that has been tested to withstand 300,000 pop-ups, and speaking of the camera, a recent teaser also confirms the device will get a 960fps slow–motion recording support. 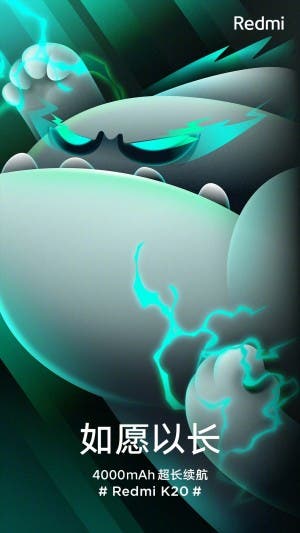 Other expected specs and features include a 6.39-inch FHD+ OLED display with up to 8GB RAM and 256GB storage, MIUI 10 based on Android Pie, 48MP primary rear camera with Sony IMX586 sensor, 8MP telephoto lens and a 13MP ultra-wide angle lens, 20MP pop-up front camera, sixth generation in-display fingerprint sensor and what is more, the device will be powered by the Snapdragon 855 SoC.

Outside of China, the Demon devil as per a tweet from Xiaomi India VP Manu Jain will launch in India soon after its China debut, but when and at what price remain to be known.

Previous Huawei is preparing to unleash its own mobile operating system

Next Redmi Note 7 sales officially discontinued in the Indian market