OnePlus smartphones have always come with top of the line SoCs and the OnePlus 7 Pro launched in May 2019 is no exception. But the brand also knows how to maximize the potential of that hardware as Master Lu has awarded top rank to the device in its May 2019 listing. The OnePlus 7 Pro scored the highest score of 439,871 points. At number two is the ZTE Axon 10 Pro which is also a Snapdragon 855-toting smartphone.

The OnePlus 7 usurped the third sport scoring more than 400,000  points and it was followed by newbies Redmi K20 Pro,  and Sony Xperia 1 in China completing the top five. 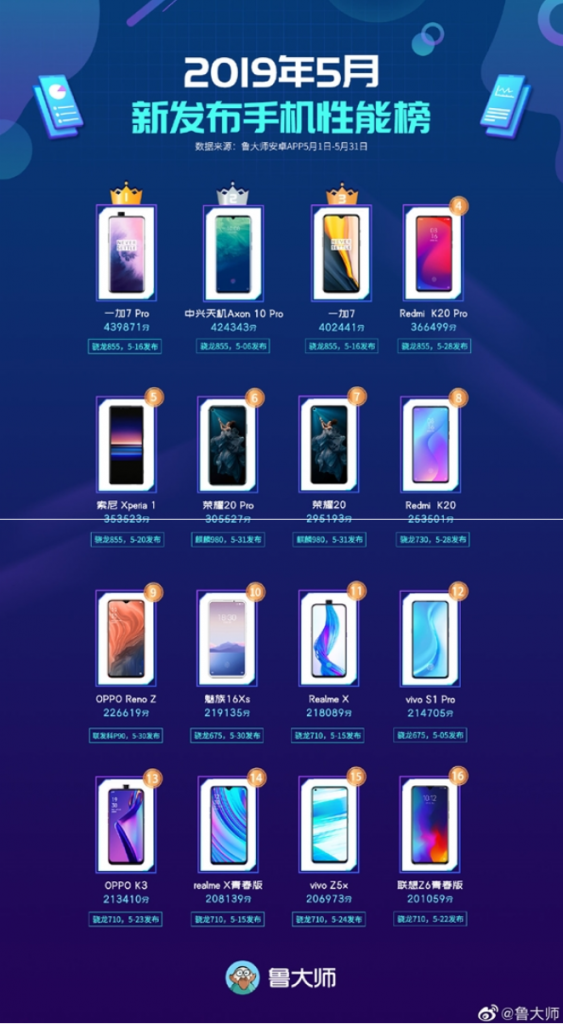 In total, there were 16 entries with seven flagship phones and nine mid-range devices for the previous month. The Honor 20 Pro and Honor 20 were the notable duo with Kirin 98o SoC and both handsets made it to the sixth and seventh spot. Other notable models include the Redmi K20, OPPO Reno Z, Meizu 16Xs, and Realme X. Check out the image for all the models in the test.

The Pro model is the brand’s most expensive and arguably the best-looking handset to date with the gorgeous curved AMOLED display and a pop-up camera. It also is the first triple camera handset from OnePlus.

Next Video : Rugged Ulefone Armor 6E and its NFC functions