Xiaomi earlier this week tweeted that its upcoming Mi 9T smartphone will be making its official debut on June 12, though it has yet to confirm whether it will be hosting an event in China or someplace else to unveil the phone or it will just be an online launch. On the Xiaomi Mi 9 and Redmi K20 relationship, it came to light via a Geekbench listing that surfaced earlier this week that the Xiaomi Mi 9T with the codename DaVinci will b launched as a rebadged version of the Redmi K20, and now it has also been confirmed the Xiaomi Mi 9T Pro is nothing new, but a rebadged Redmi K20 Pro, at least as per a new Geekbench listing

The Xiaomi Mi 9T Pro has surfaced on the Geekbench database with 3,453 points and 10363 points on the single-core and multi-core tests of Geekbench respectively. The handset is loaded with Android 9 Pie OS, 8GB RAM, and much like the listing of the Mi 9T, the listing made reference to the “Raphael” codename, the same codename was before launch associated with the K20 Pro. The Xiaomi Mi 9TPro aside from the name difference will share the same design, specs, and features with the Redmi K20 Pro if indeed it eventually launches as a rebranded device. 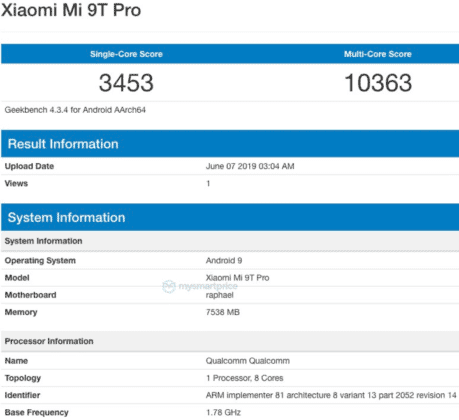 Xiaomi has so far only officially confirmed it will be launching the Mi 9T, but that could be announced alongside the Xiaomi Mi 9TPro given it Geekbench appearance. It is unclear at the moment where Xiaomi will launch the Xiaomi Mi 9T/Pro, but Indian is clearly out of the picture, given that the brand international Vice President and Indian Market Director Manu Kumar Jain already confirmed the Redmi K20 and K20 Pro will be launched in the sub-continent unchanged sometime in July. There are also unverified reports suggesting the K20 will be rebranded as the Poco F2 in some regions.

Read Also:  Xiaomi POCO C50 is set to launch at the end of November
Source/VIA :
mysmartprice

Next Google Stadia roll-out starts in November with 14 countries