Samsung officially announced that it will hold “Samsung Vision and Future Media Communication Conference” in Beijing on June 25. According to the poster released by Samsung, the theme of this media communication conference is “5G”. Samsung may officially release the Samsung Galaxy S10 5G Chinese version in this communication meeting. In February of this year, Samsung released the world’s first 5G mobile phone, Galaxy S10 5G, which was first sold in Korea on April 5. On June 7, the Samsung Galaxy S10 5G version was launched in the UK via EE and Vodafone. However, this smartphone has not been listed in China. 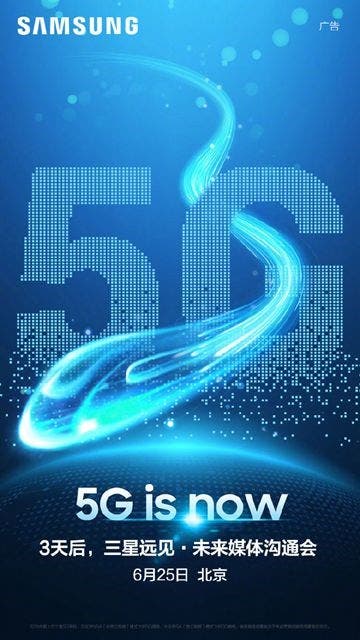 The 5G network was only recently commercialized in China thus it is not surprising that the company will release this device for the Chinese market. The Samsung Galaxy S10 5G is equipped with a 6.7-inch curved AMOLED display screen with a 1440P+ resolution. It is the first device to support HDR10+ and the first mobile phone equipped with an ultrasonic fingerprint reader. The phone is equipped with the Snapdragon 855/Exynos 9820 chipset, coupled with 8GB of RAM and 256GB/512GB of internal storage. The Korean version of the Galaxy S10 5G version is not equipped with the Qualcomm Snapdragon 855 processor, but uses Samsung’s own Orion Exy9820 processor, with Samsung’s own 5G baseband Exynos Modem 5100. However, the Samsung Galaxy S10 5G Chinese version will Qualcomm Snapdragon 855 processor with Qualcomm X50 5G baseband.

The Samsung Galaxy S10 5G is Samsung’s first 5G mobile phone supporting mmWave and below 6GHz networks, and its Wi-Fi 6 can also be used for 1.2Gbps local connection.  In terms of price, the 8GB+256GB version is priced at 1.39 million won (∼$1199) while the 8GB+512GB version is priced at 1.55 million won (∼$1337 dollars). Currently, there is no relevant information on the price of the Chinese version of this smartphone.