Since Samsung introduced the first foldable smartphone, Galaxy Fold, there have been delays with the release of this device to the market due to display issues. According to reports from, MySmartPrice, the 5G version of this device has now passed the FCC certification. According to an EMC (Electromagnetic compatibility), this device was filed back on April 25 and was approved on June 3. 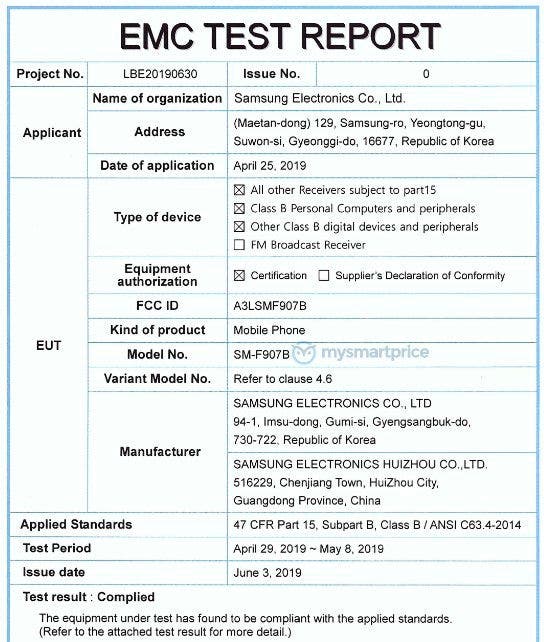 The Samsung Galaxy Fold was originally scheduled for release in April this year. However, due to multiple issues with the display, the company had to recall the review units which it sent to reviewers. Samsung subsequently issued a statement at the end of April, announcing the delay in the global launch of the device. According to previous reports, Samsung intends to strengthen the shielding design of the hinge to reduce the exposure to the air and to avoid ash. Samsung also emphasized to users in the new version of the manual how to properly use and protect this phone.

Interestingly, some of the parameters of the Samsung Galaxy Fold 5G version are significantly different from the regular version. The former only supports single card slot and the built-in battery shrinks to 4235 mAh while the latter supports both nanoSIM and eSIM card and it has a 4280 mAh battery. Except for these difference between the two phones, there is no difference in other parameters.

Previous While the world struggles for 5G, Oppo's MeshTalk make calls and send texts without Internet

Next ZTE Developed The Third-gen 5G Chip, Coming in the Second Half