Today, Zhao Ming, president of Honor, released a video on Weibo to congratulate users on the 7th anniversary of the establishment of the Pollen club. In addition, he also talked about Honor 5G upcoming smartphone. First of all, Zhao Ming thanked the Chinese pollen club for their support. “It is the companionship of everyone in the past seven years that gives us the momentum to keep moving forward.” 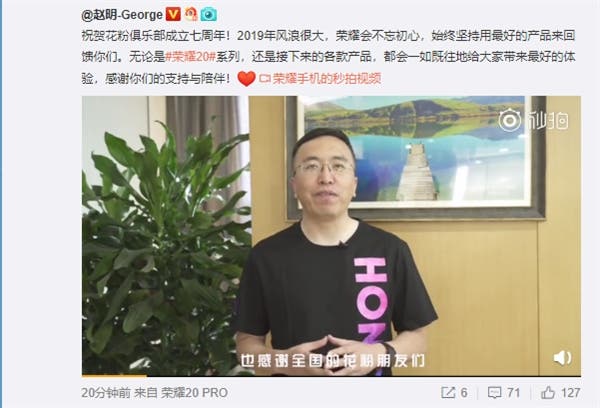 Zhao Ming mentioned that Honor 5G smartphone will arrive in the second half of the year. He said that 2019 is China’s 5G first year, and the new Honor 5G phone is already on its way. In the fourth quarter of this year, Honor will launch this smartphone with support for both NSA and SA networking.

Earlier, Yang Jie, chairman of China Mobile, said at the GTI2019 summit that the 5G terminal must have the SA mode on January 1 next year. This means that NSA mobile phones will not be accessible to the Internet next year. If there is no accident, the 5G baseband used by the Honor 5G new device should also be Huawei’s Balong 5000, which is also a rare baseband product that supports NSA and SA networking.

At the same time, he also heaped praises on the Honor 20 series released in May. He said that the Honor 20 series DXO score is 111 points, which is the highest score in the world. He also said that Honor will always use the best products to give back to consumers. Not only in China because Honor recently announced the Honor 20 series in Malaysia, Britain, France, Germany, Russia, and it will soon land in India, Spain, Egypt, and other countries.