Meizu has been rumoured to launch a Plus or Pro variant of its flagship 16s (review) series this year and it seems that is finally happening. A listing of the Meizu 16s Pro has appeared on e-store Taobao this week as reported by a Chinese portal. This happens after we saw live images of a Meizu handset last week with triple cameras alleged to be the Meizu 16s Pro. And the Taobao listing indeed reveals the same thing. 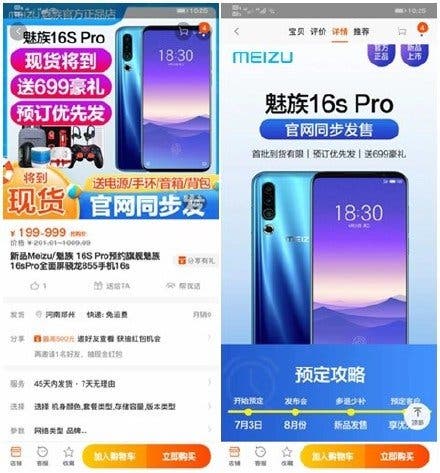 Last year Meizu revealed both the Meizu 16 and Meizu 16 Plus at the same time but this time the company has kept a gap between its two flagships. Also, it seems there will be little difference between the two 16s siblings other than the triple camera. The exact triple camera sensors are not known but this is the second handset from Meizu after the Meizu 16Xs. The Blue colour looks like a nice touch compared to the rather common Black and White we usually see.

As far as Meizu itself is concerned, there is no official information on the release of the Pro model. Speculation suggests that the bigger Meizu 16s sibling will come equipped with a bigger 6.76-inch 2K screen and a 4200mAh large battery.

Next CHUWI LapBook Plus with 4K display launched today for $439