Xiaomi’s MIX line has become very popular due to the full-screen design brought be the first model. The second-generation smartphone was the improved variant of the original model. The Xiaomi Mi MIX3 wasn’t welcomed well by users because of its sliding screen design. But we should also point out the company’s first 5G smartphones was designed on its base. Anyways, we are waiting for the next-generation model. And though there have been no serious leaks, 91 Mobiles decided to collect all the existing information about the Xiaomi Mi MIX 4 and introduce it as a complete specs list.

Also Read: Mi MIX 4: According To Lei Jun, It Worth The Wait

According to the source, the Xiaomi Mi MIX 4 will be packed with Qualcomm’s current flagship mobile chip, namely the Snapdragon 855. As Xiaomi has left only three series of smartphones (the original Mi, MIX, and CC), it’s quite logical the company will put the best hardware inside. But surprisingly, the phone is assumed to sport a 6GB of RAM. Honestly, it’s sufficient for a stable performance. But the current generation MIX model offers up to 12GB of memory. 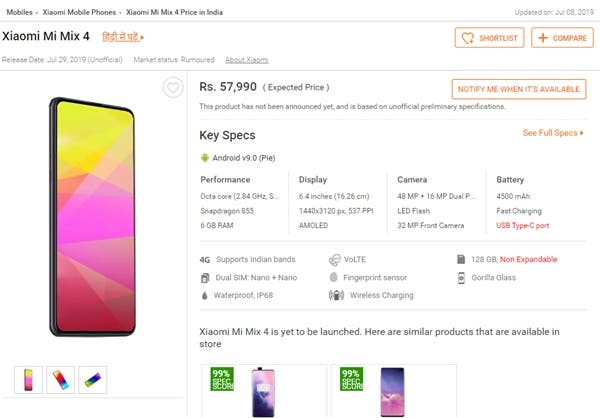 Anyways, the selling point of the MIX line handsets has always been the screen. As the photo shows, the Xiaomi Mi MIX 4 is going to feature a genuine full-screen appearance. It’s still unknown which technology will be used by Xiaomi to provide such a design. We mean Xiaomi has already demonstrated its in-screen camera technology. So there is every reason to think the latter will debut with this smartphone. The source proves our protagonist will come with a display that has a resolution of 1440×3120 and a pixel density of 537ppi.

As for the second selling point, the Xiaomi Mi MIX 4 is assumed to sport a dual-camera on the back. Though some Mi fans have been thinking it will be packed with a 48MP + 48MP camera, likely, it will come with a 48MP + 16MP sensors combination. On the front, we will see a mainstream selfie shooter with a resolution of 32MP.

The batter will have a capacity of 4500mAh, and it will support fast and wireless charging through USB Type-C interface.

Next Honor 9X Will Succeed With 7nm Process Kirin 810 Chip