First, the big news: Xiaomi in a tweet earlier this week confirmed that the Xiaomi Mi A3 will be launching pretty soon. We are not sure what pretty soon means in this context, but that might mean a few days/weeks from now given the increasing number of leaks from the past few days. 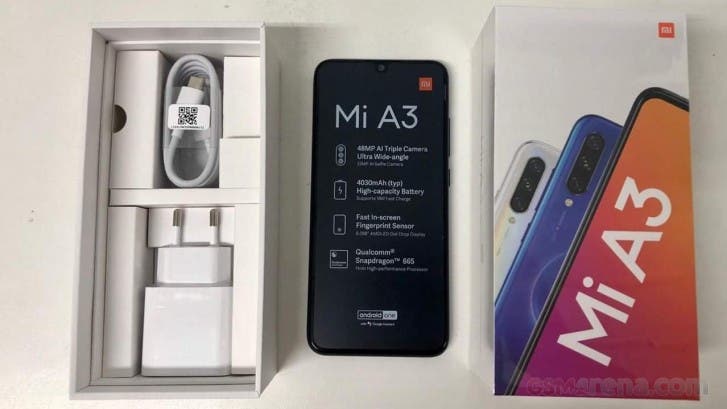 Some official looking renders and specs of the Xiaomi Mi A3 leaked a while ago spilling the bean on the design and specs of the device, and now, a more convincing leak is here to add substance to existing leaks.

Gsmarena, via an anonymous tipster, has revealed some live images of the Mi A3 and its retail box which confirm the phone’s design and key specs. The retail box which is essentially in white confirms the Mi A3 has the same color options as the Mi CC9 – White Lover, Blue Planet and Dark Prince.

As you would notice from the images above, the Xiaomi Mi A3 has a notched display upfront similar to the CC9, even though the bottom bottom bezels seem a bit bigger than the ones on the CC9. On the flip side, it has a triple rear camera setup with a LED flash and the Xiaomi stamp below it on the left-hand side.

In contrast to reports that suggested it could come with the Snapdragon 730, the leaked live images say the device has the same 665 SoC as the Xiaomi Mi CC9e – a confirmation that it could indeed finally launch as a rebadged CC9e. The leak also confirms the Mi A3 has a 48MP camera at the back and a 32MP selfie shooter on the front. A 4,030 mAh battery with 18W fast charging support, and an on-screen scanner all are part of the confirmed specs.

Despite the talk of being a repackaged CC9e, rumors say the Mi A3 will drop CC9e HD+ display for an FHD+ panel.

Next LG to launch four smartphones in the G series