A few days ago, we learned about a new handset that will come our way from Meizu. A model called M973Q has been approved by China’s National Radio Administration. The phone supports Full Netcom, and the date of issuance is July 31. Many think this is the upcoming Meizu 16s Pro.

It is worth mentioning that the Meizu 16s got the same certification with the model name M971Q. That’s why we are thinking this is the upgraded model of the Meizu 16s. 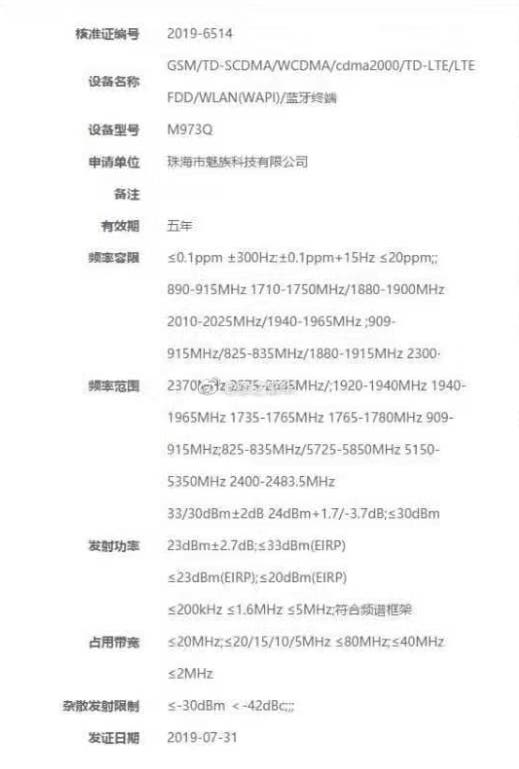 After obtaining the approval of the committee, the other two certificates will generally be synchronized. Moreover, once a smartphone gets these three, it means the phone will appear on shelves soon. In other words, we should wait for the Meizu 16s Pro to go on sale in the near future.

Recently, Meizu founder, chairman, and CEO Huang Zhang said in the forum: ‘Soon new products will be listed. Thank you for supporting Meizu!’

On April 23 this year, the company released the flagship phone, namely the Meizu 16s. In fact, this handset made a huge stir around it. It adopts the bang-free symmetrical full-screen design and the COF flagship packaging technology. The chin is only 4.2mm, and the screen ratio is 91.53%. This handset has the highest screen ratio among all Meizu phones.

As for the core configuration, the Meizu 16s equipped with the Qualcomm Snapdragon 855 flagship platform. The maximum memory is 8GB LPDDR4X, and the maximum storage is 256GB UFS 2.1. Under the hood, it carries a 3600mAh capacity battery. The phone also supports dual-frequency GPS positioning and comes with a full-featured NFC.