As the Meizu 16s Pro draws closer to its launch, there have been a plethora of rumors regarding this device. A recent image on slashleaks suggests that this device comes with Flyme 7 and a flat display. Earlier today, the Meizu 16s Pro exceeded 460,000 on AnTuTu. This makes it the best performing SD855+ smartphone. Now, Meizu VP, took to Weibo to announce that there will be a green colour option for this device. 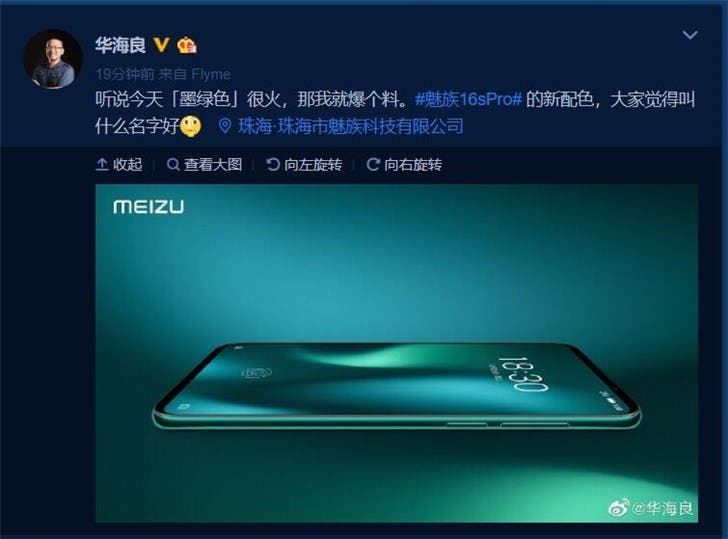 Looking at the image by Meizu VP, it appears that this device comes with a flat display. The overall design of Meizu 16s Pro is basically the same as 16s. It does not adopt a notch or punch-hole design. The fingerprint is under the display. Overall, the upper and lower borders of this device have similar thickness while the left and right bezels are ultra-thin. In addition to the SD855+ chip, this smartphone also comes with an Adreno 640 GPU and a 2232 × 1080 resolution display. The unit that arrived AnTuTu comes with 6GB of RA and 128GB of internal storage. In the camera department, we have a 20MP selfie camera and a 48MP main rear camera. The rear camera uses a multiple sensor setup. This smartphone will sport Android 9 Pie out-of-the-box.

Next Oppo and Huawei are ready to launch their next smartwatches