The Reno series currently includes the Oppo Reno 10x Zoom Edition and the standard variant of the Reno. And this the company will further expand in the coming days with the launch of the OPPO Reno 2 series. The company only recently confirmed some of the key specs of the upcoming device, and now we are getting to see how the device performs in the Geekbench test.

Now, a device with the PCKM00 model number believed to be a member of the OPPO Reno 2 series has surfaced on the Geekbench database. And as usual, the listing reveals the performance and key specs.

The listing reveals that the device will be powered by the SM6150 octa-core chipset, which is perhaps the SD 665. It further reveals the device will boot Android Pie with ColorOS 6 out of the box. On the performance tab, the alleged OPPO RENO 2  returned 6,560 points in the single-core test and 6,950 in the multi-core department. It features 8GB of RAM. There are speculations that the Reno 2 will come with the SD 700 series, and not the SD 665. And that is further justified given that the performance scores are well within that of the Snapdragon 700-series chip.

Sadly, the SoC detail has yet to be verified. As even the listing on TENAA only referenced an octa-core processor clocked at 2.2 GHz. 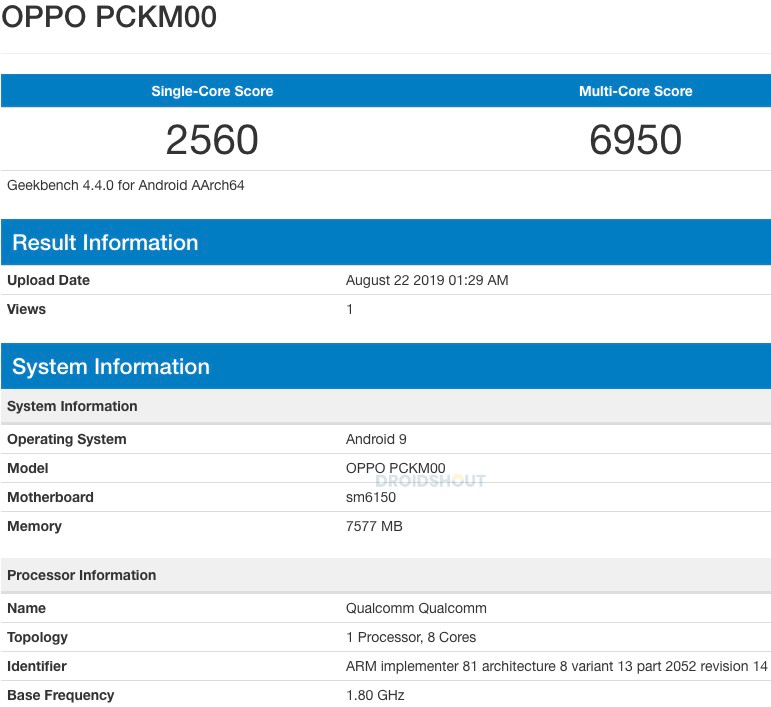