Huami is one of the world’s most important wearable companies in the world today. The company entered in the SoC’s race last year with the introduction of its very first chipset – RISC-V based Huangshan 1. While this was a good achievement for the company, new reports indicate that the successor to wearable-focused SoC will be more impressive.

According to the reliable leakster, IceUniverse, Huawei’s upcoming chipset, the Huangshan 1S will be built using the 7nm process. This process is present in the high-end chipsets of 2019, currently is available only in premium devices. If the new report is accurate, Huami will be the second Chinese company to develop a 7nm chipset after Huawei. This will be an incredible feat for Huami. The tipster states that we could see it inside the Amazfit Sports Watch 3 that will be released tomorrow. 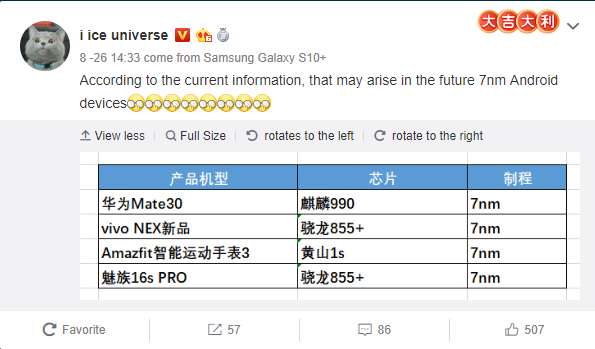 According to reports, we’re going to see at least two new smartwatches from Huami in the tomorrow event. One will come to compete with Apple Watch featuring a similar square-shaped design but with a custom-built AMOLED display. The second smartwatch will be a successor for the Pace 2 announced a few months ago. It will be dubbed as AmazFit Sports Watch 3 or Pace 3. It will feature a transflective display just like its predecessor and NFC. Huami will also unveil a premium version of the Pace 3 with titanium body.

Next Samsung Galaxy M30s Might Launch in India in September, Recent Report Suggests