Apart from M-series lineup, Samsung has A-series that focusses on the mid-range segment offering a premium experience to the consumers. This year, Samsung has launched numerous A-lineup devices that managed to steal the show. The smartphone maker is now working on two another device dubbed Galaxy A91 and Galaxy A90 5G. In fact, the brand confirmed the existence of both the device accidentally through its official website. For those who’re unaware, Samsung recently introduced Super Fast Charging 2.0 standard with Note 10 duo. Well, that’s how this leak came forward thanks to the courtesy of 91Mobiles.

Samsung Galaxy A91, Galaxy A90 5G leaked by the brand itself 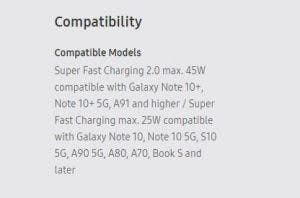 Both the Galaxy A91 and Galaxy A90 devices were leaked by the Samsung’s Hungary website. The devices were spotted on the product description and compatibility pages of the company’s latest charging standard. As per the report, Samsung Galaxy A91 will support the 45W super-fast charging 2.0 which is also available in the Note 10 duo. The Galaxy A90 5G, on the other hand, will make use of the lower 25W fast charging feature. Apart from these, this leak didn’t reveal anything about both the devices but thankfully, the previous leaks had already.

As the name suggests, Galaxy A91 is going to the most expensive smartphone in the mid-range A-lineup. On the other hand, the Galaxy A90 5G will support the latest 5G connectivity. Coming to the display, the A91 will feature a massive 6.7-inch AMOLED display with a punch-hole camera setup on the front. The Galaxy A90 5G, on the other hand, will feature the same display size but with teardrop notch instead of the cutout.

Apart from these, we have some more information on the Galaxy A90 5G. The device will feature a triple camera module at the back. Like Galaxy A91, the smartphone should run on either Snapdragon 855 or Exynos 9825 chipset. Well, both are the flagship-grade processors. If that’s the case, this will be first that the company will go for the flagship SoC for its non-flagship lineup.

Sadly, we don’t have any major information in terms of pricing of both the devices. Unlike Galaxy A80, we do expect some powerful hardware to justify the expensive price tag which is something A80 was not able to do so. Since the smartphone maker has already listed the device in its official website, there is a high chance that the official launch might happen sooner than we think. We might see the official unveiling happening within the next few months.