As the most powerful selfie-focused smartphone of Honor, the Honor 20S not only sports a 32-megapixel camera but also support a portrait super night scene mode. With the 7nm process CPU, which also comes with AI, it provides the night scene selfie effect. However, this handset is not going to be the only star at the conference that will take place on September 4. Seems the new Honor Play is on the way.

Yesterday, Zhao Ming, the president of Honor, issued a statement through his Weibo channel. He said that in addition to the selfie-centric Honor 20S, they will release another outstanding handset. So the rivals should be afraid. Every time, when Honor uses the latter phrase, we see a new handset from the Play line. Say, when it was launched for the first time, the Honor Play came with the top-end Kirin 970 and was priced as low as 1999 yuan ($279). Plus, it supported the GPU Turbo technology. 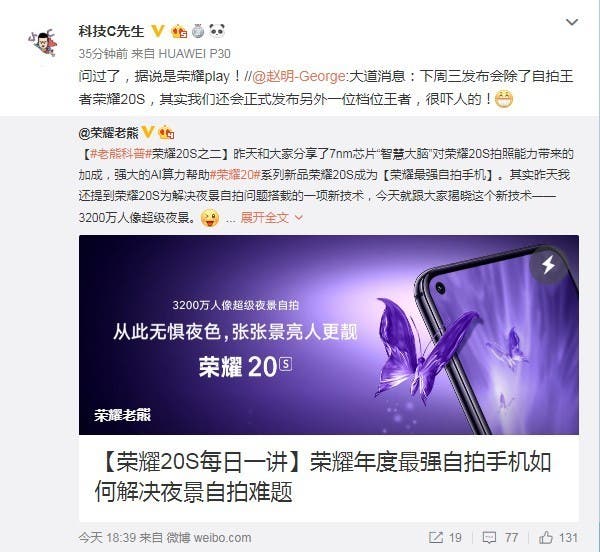 However, when Zhao Ming was asked whether it’s the new Honor Play, there was no certain answer. Anyways, the Honor fans think this will be a quite different handset. And it will have nothing in common with the Honor 20S. They mean the alleged new Honor Play will have another positioning and pricing.

As for the Honor 20S, it will be powered by the 7-nanometer Kirin 810 SoC. The latter has 8 cores with a peak frequency of 2.27GHz and a Mali-G52 MP6 graphics card. It is also known that the Honor 20S will ship with a triple-rear camera. The main sensor has a 48-megapixel resolution. For selfies, it should offer a 32-megapixel module.

The device will have a fingerprint scanner and support fast charging of 20W. The Honor 20S will run on EMUI 9 based on the Android 9.0 Pie operating system.

Next New Huawei FreeBuds to be unveiled at IFA 2019