Vivo Nex 3 was officially unveiled yesterday. The smartphone of the Asian brand is the first to feature a “waterfall screen”. That is, a screen so curved that the image extends to the sides of the smartphone.

Today we have more information about the performance of this smartphone. More specifically the AnTuTu Benchmark score. According to the benchmark test, the smartphone hits nearly 500,000 points. 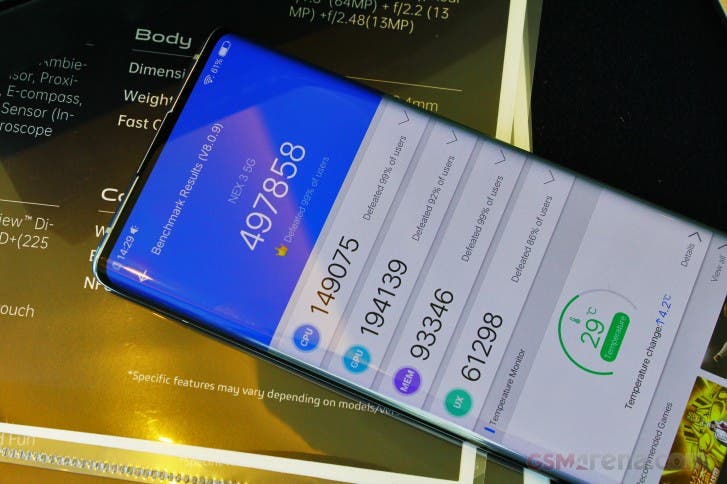 This score is a new record. The smartphone thus surpasses the latest Asus ROG Phone II which gives us 492,000 points and the Xiaomi Black Shark II with 469,000 points.

With a total score of 497858 points, this Vivo NEX 3 is the most powerful smartphone on the market right now. The terminal comes with the Qualcomm Snapdragon 855+ processor, but something inside it is pushing more than its competitors with the same chip.

AnTuTu Benchmark is a perfect application for comparing smartphone performance. Still, it is worth noting that a device is not measured with numbers. There are devices that are fantastic in their performance benchmark, but they fail greatly in their user experience. But this is not a problem for Vivo. Since their smartphones have a good user experience.

However, don’t expect this number to stay in first place for long. Qualcomm’s new processor is expected to come out later this year and incorporate almost every high-end smartphone next year. That is, it should not be long before the 500,000 points are reached.