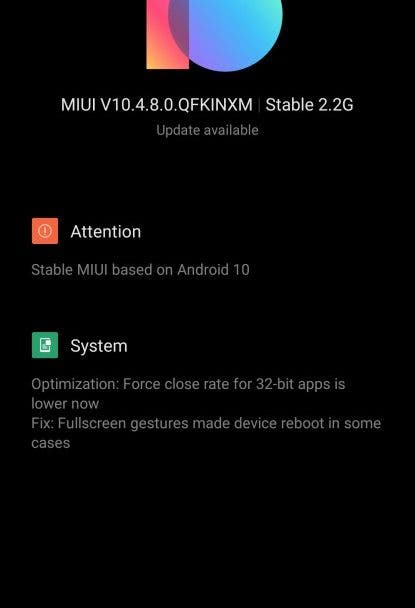 Various Indian users of Redmi K20 Pro has reported that the smartphone is indeed getting the latest software update in India. Apart from the stable Android 10, the update also fixes the fullscreen gestures issues which were forcing the device to restart in some cases. This new update also optimizes the 32-bit apps support. The new update changes the software version to MIUI 10.4.8 stable. Coming to the new features, the update brings new gesture-navigation interface, dark theme, notification action, and prioritized notification. When it comes to the size, the MIUI 10.4.8 update weighs 2.2GB.

Xiaomi has started pushing this new update in batches and most of the users are getting the OTA notification. If that’s not the case, you can try updating the device manually. To do that, head over to the updater app to scan for the latest available software update. Alternatively, you can also find the option in the Settings app.

Back to the new features, the prioritized notification allows users to classify notifications based on priority. You can also choose to get according to the set priority. In other words, you will receive high priority notifications while the unimportant will remain silent. Luckily, the new dark mode is available for the entire system for which the users were waiting for a long time. Lastly, the users now have the option to ditch the navigation keys for the swipe gestures.

Next Xiaomi Expected To Return To Top Three In Smartphone Market