The entry-level Redmi 8A that was launched earlier in September and the Redmi 8 that debuted in India just hours ago will be heading to China in a few hours. This confirmation comes from the official Redmi who through a Weibo post revealed that it will be releasing a new product in its home market, China in October 11th.

While no reference was made to the Redmi 8 and Redmi 8A, the Weibo post reminds us of the Redmi Journey since the first Redmi was released earlier in 2013. So it is safe to assume we are in for the Redmi8, and the Redmi 8A. Both devices have also passed through the TENAA certification process in the country, and are eligible to debut in the market.

The Redmi8, and 8A are both a direct sequel to the Redmi 7 series announced back in April this year. They both look alike, though with a few differences, and of course a marginal price difference. The Redmi8, and the 8A are carved out of glossy plastic but sure looks premium. 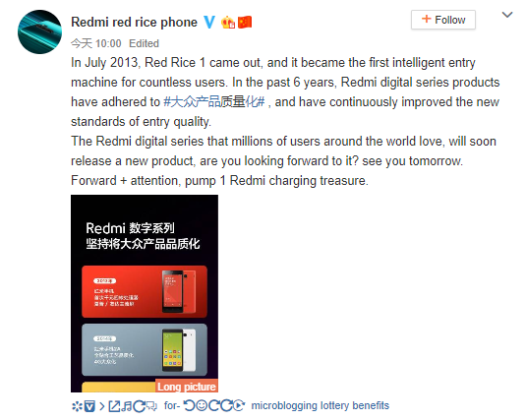 They both get a 5000mAh battery, have AI scene detection with 33 profiles, supports dual SIM, but only the Redmi 8 gets a rear fingerprint scanner. And besides the Rear scanner, and the dual camera, the 8A, and the 8 share virtually the same specs. For that marginal difference, the Redmi 8 at $112  is marginally higher than the 8A which starts at $91.