The Xiaomi Mi CC9 Pro and Xiaomi Mi Note 10 are two upcoming smartphones that would be dropping pretty soon – that’s no secret. One piece of information that has remained officially unconfirmed is whether or not both devices are one and same devices for different markets. Well, reports suggest Mi Note 10 is the Global variant of the CC9 Pro, and now it appears we have some more concrete evidence to prove that.

The Xiaomi CC9 Pro with the codename TUCANO earlier this week appeared on the Geekbench Benchmark database. Now, the Xiaomi Mi Note10 has taken the Geekbench test, and interestingly, it has the same ‘Tucana’ codename which indicates both are identical devices. Now, that s more than enough evidence to prove they are both one and same device, albeit destined for different markets. 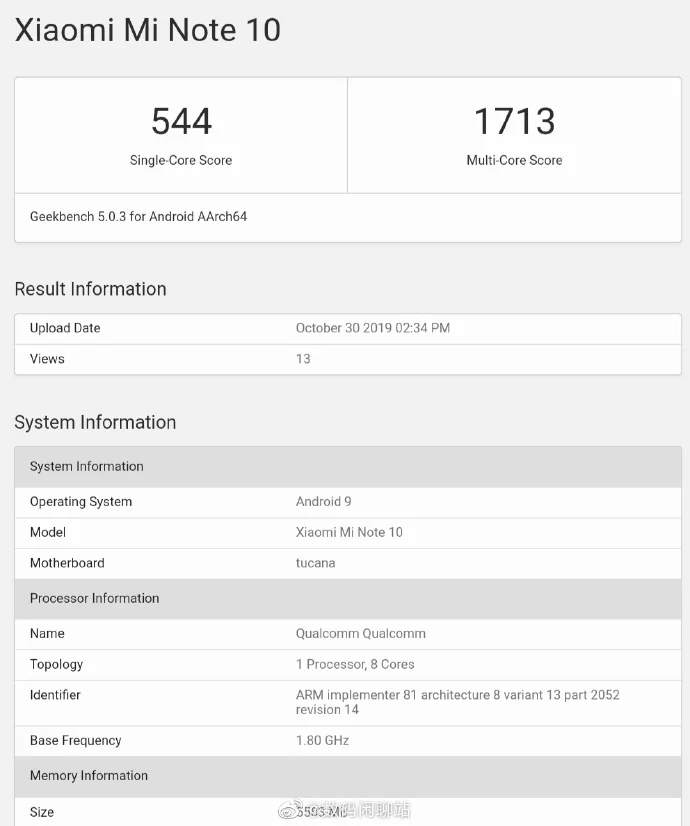 Much like the CC9 Pro, the listing reveals that the Xiaomi Mi Note 10 will be powered by an octa-core processor with 1.8GHz base frequency. The SoC is most likely the Snapdragon 730G SoC and boots Android 9 UI-based MIUI operating system out of the box.

The listing reveals the Mi Note 10 has 8GB of RAM, but it appears there are more than that in the offing. As per the listing on TENAA, the Xiaomi Mi Note 10/cc9 Pro will come in 6/8/12 GB RAM and 64/128/256 GB storage options. Obviously,  the most USPs of both devices is the 108MP main camera sensor. There are four other camera sensors, with a dual-LED flash, 5x optical zoom, and a 32MP camera for selfies upfront. The device is expected to come fitted with a 6.4-inch AMOLED display with Full HD+ resolution with a notch for the selfie cam.

Aside from the Mi Note 10, Xiaomi could also announce the Mi Note 10 Pro at the event on November 5th in China. It will feature a larger 6.7-inch AMOLED display with a refresh rate of 90Hz, perhaps with the flagship Snapdragon 855+ SoC.