Oppo just announced the Reno 2 series a few months back and rumours of its successor in the form of Reno 3 are now in the airwaves.  The alleged specifications and price of the phone have now surfaced on  Weibo, courtesy of a reliable tipster.

According to a post shared by the tipster, the Reno 3 from Oppo will flaunt a 6.5-inch AMOLED at the front with FHD+ resolution and 90Hz refresh rate for smoother transitions. The fingerprint sensor will sit underneath the display like most phones these days. The phone will be powered by Qualcomm Snapdragon 735 SoC, a step-up from the Snapdragon 730G found on its predecessor Reno 2. It is expected to come with 8GB LPDDR4X RAM and 128GB / 256GB UFS 2.1 storage, as per the leaked sheet below. 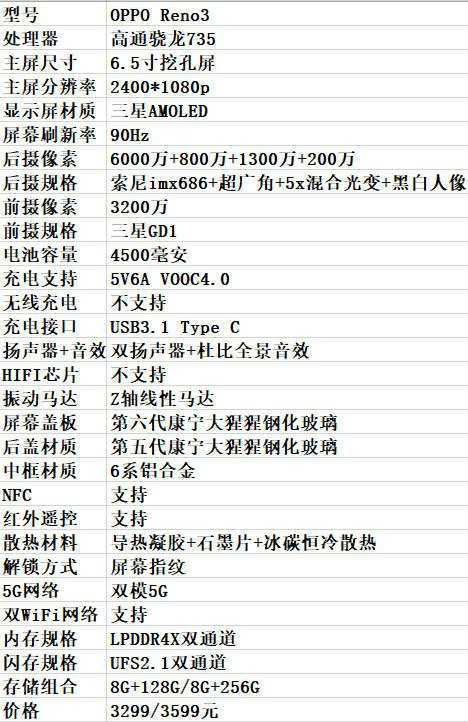 Like the previous Reno series phones, the Reno 3 is also expected to weigh more on camera as it will feature a quad-camera setup. The primary sensor will be of 60 megapixels which will be accompanied by unknown 8MP, 13MP, 2MP sensors respectively, the tipped spec-sheet suggests. There will be also a 32MP selfie camera, however, it is not sure whether it will be nested in a notch or in a shark fin pop-up module similar to the previous Reno phones. The device will be backed by a 4,500mAh battery with support for Oppo’s proprietary 30W VOOC 4.0 fast charging technology.

Next "Lenovo One" will merge Windows and Android systems