South Korean manufacturing giant, Samsung, is obviously working on the Samsung Galaxy S11 series. Early information about this series shows that it will have at least five models. According to @evleaks, this series will have a 6.2 or 6.4-inch, 6.7-inch, and 6.9-inch models. The 6.2 or 6.4-inch and 6.7-inch models will be available in 4G and 5G versions. However, the 6.9-inch version will only have a 5G model. None of these models will use a flat display. 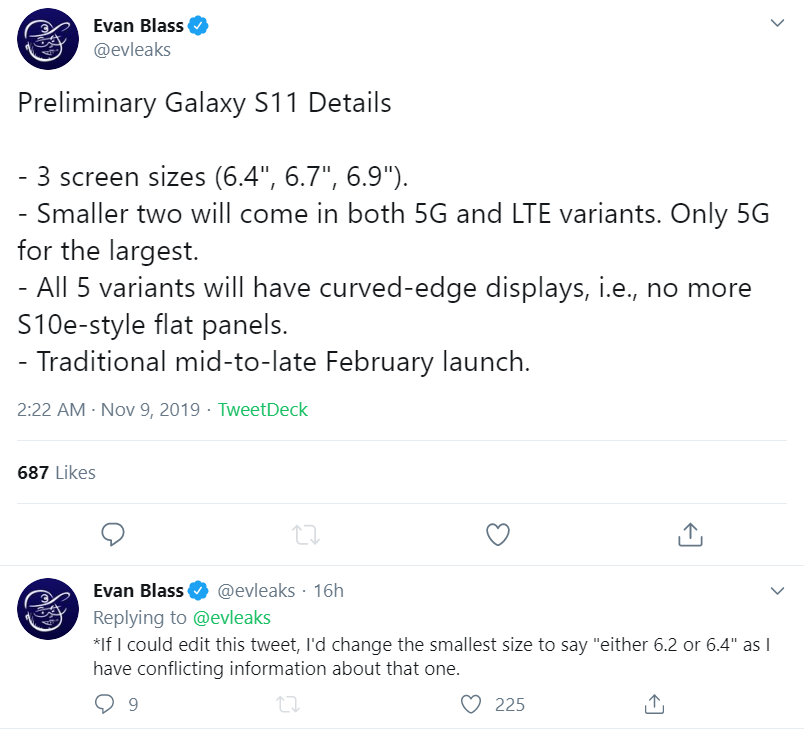 It is worth noting that XDA developers found “108MP” in OneUI. This indicates that Samsung is developing a smartphone with a 108MP camera. According to speculations, Samsung will probably use the 108MP on the Galaxy S11 series. In addition, it will also use the flagship Snapdragon 865 SoC.

Furthermore, @evleaks revealed that all five models will come with a curved-edge display. This means that the S11 series will not use a flat panel display. As for the front camera, this series should continue to use a punch-hole front camera. Since the under-display camera technology has not been well developed, at best, we may see a smaller punch-hole design on the Galaxy S11 series. The Samsung Galaxy S11 series will be the first Qualcomm Snapdragon 865 smartphone to go into mass-production.

A few days after @evleaks revealed some details about the Galaxy S11 series as shown above, @ishanagarwal24 now has information on the colour options.

According to the exclusive report from Ishan Agarwal, each model of the new Samsung Galaxy S11 series will have at least three colour options.

Furthermore, he also mentioned that Samsung is currently developing a new generation of Galaxy Buds. According to him, the model number of this device is SM-R175 and it will be available in four colours. These include blue, pink, black and white. The Galaxy Buds will arrive with the Galaxy S11 series. The new Galaxy S11 series will officially meet with you in February 2020, so stay tuned!