In recent years, Samsung has been leading the smartphone market. And though currently, it still ranks first, the China-based manufacturers are breathing down its neck. So this South Korean company has to work harder and bring more powerful and innovative flagship models. As for the Samsung Galaxy S11, we are already getting noteworthy information concerning this handset. It has leaked on GeekBench 5.0.3 sub-library with a model name of SM-G986B. Let’s take a look. 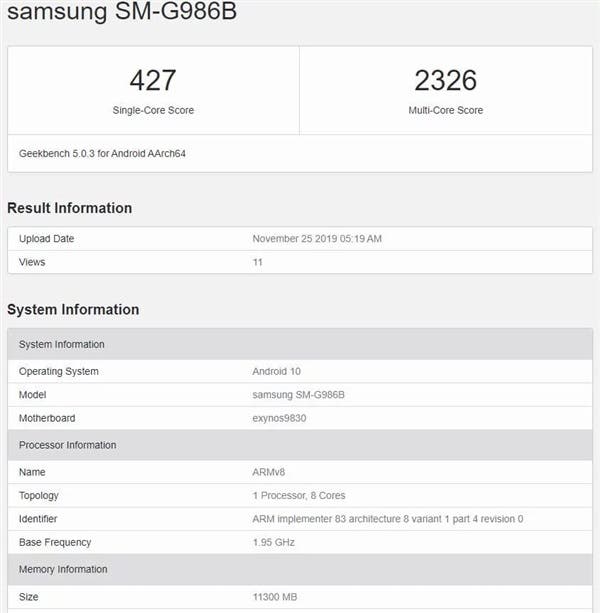 From the screenshots, we can see the alleged Samsung Galaxy S11 has a single-core running score of 427 points and a multi-core running point of 2326 points. In terms of configuration, this handset is equipped with the Exynos 9830 chip (Exynos 990) and a 12GB RAM. Of course, it comes with a factory pre-installed Android 10 system.

However, this running score seems to be not ideal compared to the previous models. We think it’s mainly related to the fact, the Samsung Galaxy S11 participating in the test is the engineering machine. Apart from this, some media analysts predicted that the new Samsung S11 will provide four storage versions, 128GB, 256GB, 512GB, and 1TB.

Another selling point of all Galaxy S series models was the camera. We have heard the upcoming Samsung Galaxy S11 will be equipped with a huge 108MP camera sensor. It will be capable of shooting 8K @ 30fps video. Also, Samsung is still developing many new camera features, including nighttime interval shooting, vertical panorama, custom filters, and more.

At present, we know the 5G version of Samsung’s upcoming flagship has passed the 3C certification. It is expected that the new phone will be officially released before the MWC 2020 exhibition.