At the ongoing Qualcomm Snapdragon Summit 2019, Co-Founder & Vice Chairman of Xiaomi, Lin Bin, officially announced the Xiaomi Mi 10. According to him, this smartphone will be one of the first devices to use the Snapdragon 865 SoC. In a follow-up Weibo post, Lin Bin also said that the Mi 10 is already in mass production. This smartphone comes with SA/NSA dual-mode 5G network. From this recent confirmation, the Xiaomi Mi 10 series will probably arrive in Q1 2020. Lin Bin said

“In 2020 Q1, Xiaomi is proud to announce that we will be introducing our flagship Mi 10 – one of the world’s first smartphones to feature the flagship Snapdragon 865 Mobile Platform.” 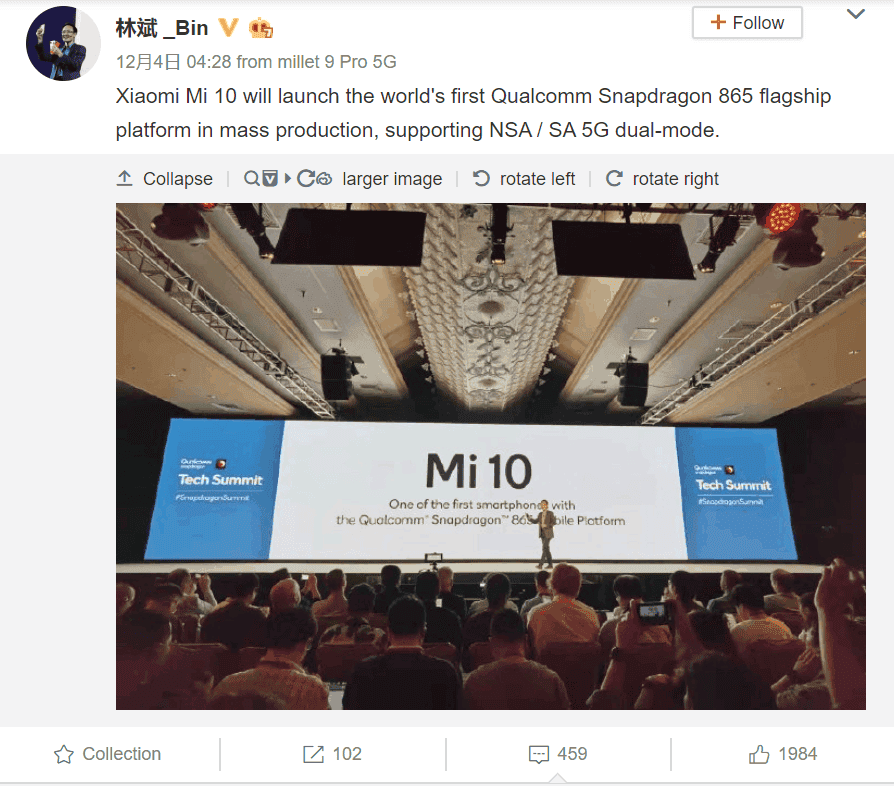 Furthermore, another Chinese manufacturer, Oppo will also use the Snapdragon 865 SoC. In fact, Oppo confirms that its SD865 phone will arrive in Q1 2020.

“In 2020 Q1, OPPO will launch its flagship product using the Snapdragon 865 Mobile Platform, together bringing a faster and superior 5G experience to users.”

Recent media reports claim that the Xiaomi Mi 9 series has been removed from Xiaomi official website. At the same time, two other Mi 5G mobile phones with the models M2001J1E and M2001J1C passed the 3C certification. There is currently no more information about Xiaomi’s next flagship phone. This seems to suggest that Xiaomi is paving way for the arrival of the Mi 10

Xiaomi’s plan for 5G phones including the Xiaomi Mi 10

Recently, Xiaomi CEO, Lei Jun, announced that the company will release 10 5G mobile phones in 2020. According to him, these devices will cover various price points. Lei Jun believes that by next year, 4G phones may face a huge sale challenge in the market. He hopes that operators can speed up the deployment of 5G. In his view, 5G is becoming an accelerator for the development of the digital economy. 5G is a big event for the entire communications industry and the Internet industry. “It has huge opportunities, and there are huge challenges and risks. Everyone has different plans and schedules. However, Xiaomi is optimistic and radical.

This statement from Xiaomi’s top official means that the company will unveil flagship, mid-range and entry-level 5G smartphones next year. For now, the price of 5G phones is a turn-off for many potential buyers. By next year, there will be a sharp rise in 5G users.