Redmi has been teasing the upcoming K30 series which is scheduled to launch next week for a while now. As of now, the brand has confirmed  many important specifications of their first 5G phone which will be also accompanied by a 4G version. Anyways, the details about the camera-setup were still missing until now which Redmi clarifies today via official teasers. The phone will sport a 64MP Sony IMX686 sensor and not a 60MP as leaked earlier becoming the world’s first phone to do so. 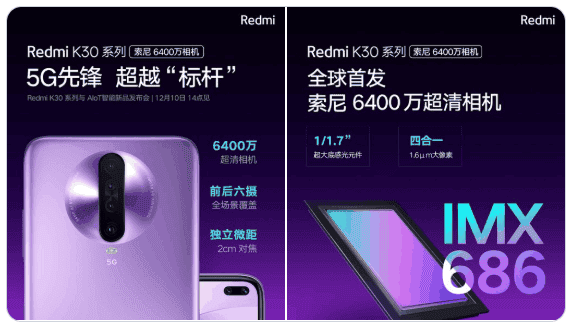 Throughout this year, Xiaomi and its sub-brand Redmi have been revealing the specifications of their new phones daily via social media, a week or two before the official launch. Following the same principle, almost all the features of the upcoming Redmi K30 series have been revealed so far except for some, especially cameras. However, that is not the case anymore as the brand confirms the all-new 64MP Sony IMX686 1/1.7” sensor for the Redmi K30 which will be accompanied by an ultra-wide unit and a macro sensor which will enable users to click a picture of the subject from as close as 2cm. We think the fourth camera to be merely a depth sensor going by the leaks.

Redmi has not mentioned anything about the front cameras yet but according to a TENAA listing, it could feature a 20MP snapper paired with a 2MP depth sensor. The Redmi K30 will be unveiled on December 10 which is still four days away and hence we can expect some more teasers from the brand.

Previous Mi Note 10 could launch in India in January