The Xiaomi Mi Note 10 went official last month as the first 108MP camera smartphone in China and some European countries. In fact, it has also been teased in the Philippines. What’s surprising is that Xiaomi hasn’t explicitly announced that they will be launching the handset in India. However, according to 91mobiles sources, Xiaomi’s 2019 Photography Challenge has hinted that it could launch in January 2020.

The Mi Note 10 has been spotted being mentioned on the Mi India Community website along with its India price tag. As can be seen in the image here, the Global Photography Challenge has some pretty big prizes but also notably, an Indian price tag of Rs 46,832 for the Mi Note 10. The winners are to be announced on February 2 which is a hint to its launch date, according to the source. 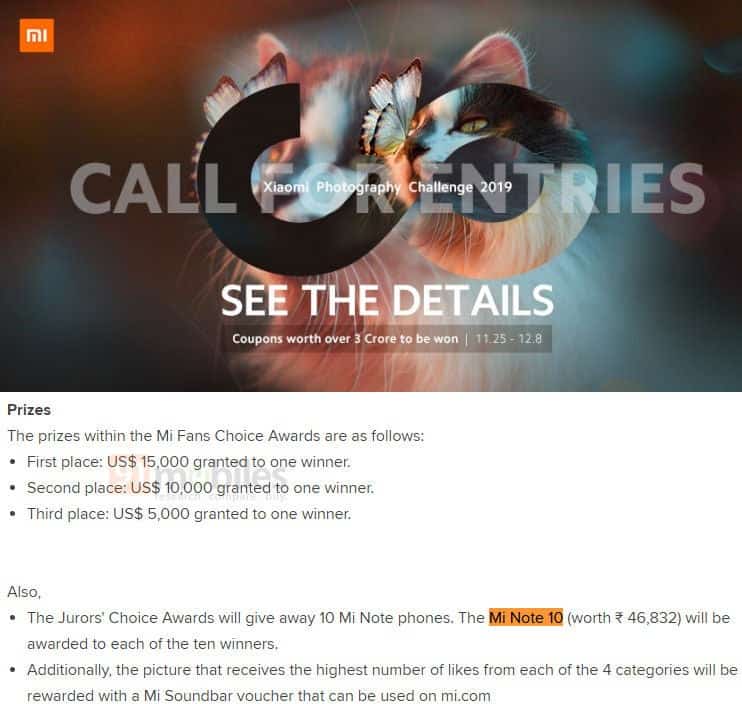 The Xiaomi Mi Note 10 is the world’s first smartphone to launch with a 108MP camera sensor. The phone touts a penta-camera setup that includes a 108MP primary sensor, a 12MP sensor, a 5MP telephoto lens with 10x hybrid zoom support, a 20MP ultra-wide-angle lens, and a 2MP macro lens. That’s not all, it’s a curved display device after a very long time from the company since we saw the Mi Note 2.

Next 64MP Sony sensor confirmed for the Redmi K30

Mi Note 10 Lite will be announced on April 30