We’re almost closing the curtains for 2019, but while the new year doesn’t come, Realme is busy preparing a new set of smartphones for release. A couple of these unannounced devices were seen on the website of IMDA (Infocomm Media Development Authority), a Singapore telecommunications regular of sorts. The devices in question are the Realme 5i and the Realme C3. The former already popped out in a couple of certifications before. Now, we’re getting more evidence of its upcoming announcement.

The Realme 5i appeared in IMDA’s database yesterday, giving us another hint that Realme is gearing for an announcement. The handset bears RMX2030 model number which checks with previous reports. Unfortunately, the listing fails to give us any hint of the device’s internals. Considering that we already have a Realme 5, 5s and 5 Pro it’s hard to wonder what Realme is preparing. 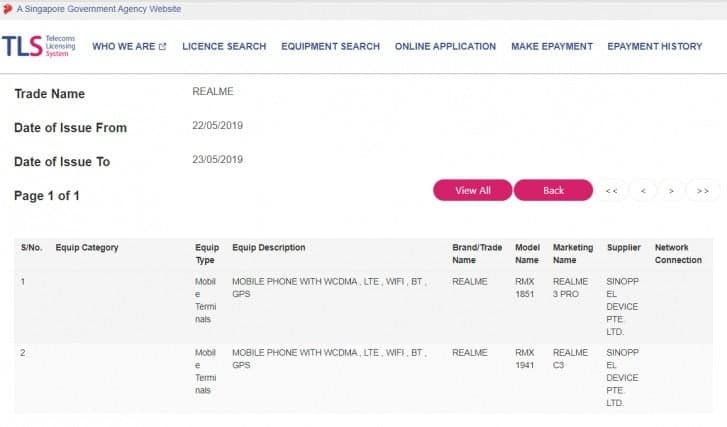 When it comes to the Realme C3, chances are that this is just another version of the Realme C2. The device with RMX1941 model number has been siting in IMDAs database since last May. The Singaporean authority listing also corresponds to one of the C2’s versions.

For now we will have to wait for more news and a possible confirmation about Realme 5i arrival. The company will announce its first 5G handset in the form of Realme X50 in January, wouldn’t be a surprise if the 5i comes along with it.