We are already aware of the fact that Samsung is working on its next iteration of flagship smartphone which includes Galaxy S11 as well as Galaxy Fold 2. Earlier today, we reported that the phone might, in fact, be launched as Samsung Galaxy S20 instead of S11 moniker. Well, the smartphone has now appeared on the Bureau of Indian Standards listing. In the listing, the phone appeared with the model number SM-G980F. 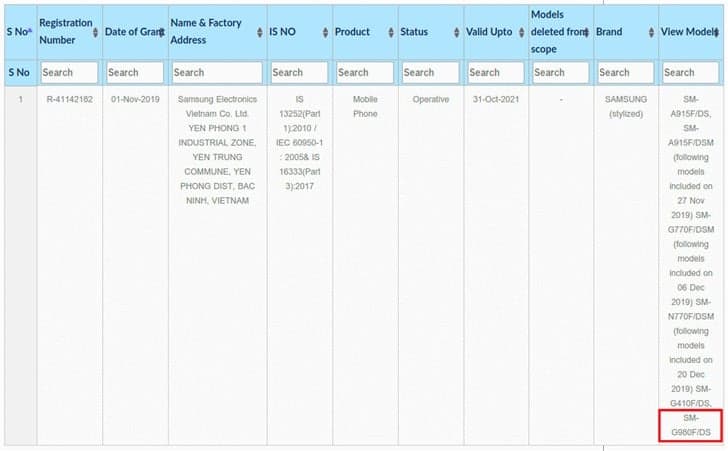 In the listing, the smartphone was found rocking the 4G connectivity. Sadly, the listing doesn’t reveal anything else about the phone. Since the device has now made its way to the BIS listing, we should see more information surfacing in the coming days. The phone will come in three different variants namely Galaxy S20, Galaxy S20e, and Galaxy S20 Plus.

If the previous rumors and leaks are to be considered, the Galaxy S11 or Galaxy S20 will make use of the flagship Snapdragon 865 chipset. Instead of the Exynos variant, the company might launch the Snapdragon variant to more regions out there. The device will come with ultra-narrow bezels on the front. The device will be backed by a massive 5000mAh battery manufactured by LG. This time we’re looking at the optical zoom in all the three variants. Samsung Galaxy S11 or Galaxy S20 is expected to see its official unveiling next year in February 2020 along with Galaxy Fold 2.